Nathan for You: The rare prank show about loneliness 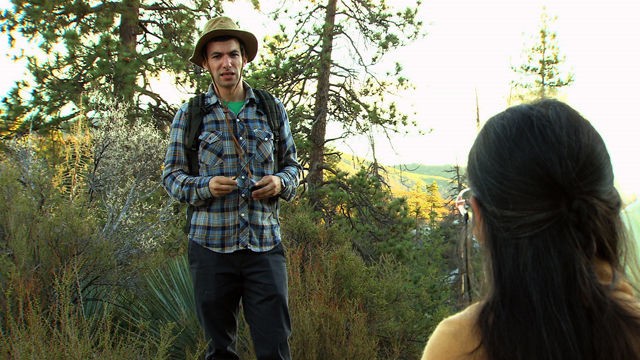 Comedy Central
It's not easy to turn in a rebate on a great deal, Nathan Fielder explains. But neither is making friends.

Of all the pre-premiere interviews for returning shows this year, none was as strange, hilarious and meaningful as the one Nathan Fielder did with some guy’s mom.

Bonney Teti, of A.V. Club writer John Teti, had previously disparaged Fielder’s Nathan For You on John’s podcast, “Mom on Pop.” So Fielder suggested that he talk to Bonnie about why she didn’t like the show. It’s a lengthy, hour-long conversation, full of arguments, discussions of comedic tastes, and promises to get breakfast together someday.

But for me, the most illuminating section was this:

“I’m gonna tell you, Nathan, the thing I find the is a fat woman on a rope swing on America’s Funniest Home Videos,” Bonney explains. “Oh, my God. You can’t picture a fat woman grabbing onto a rope swing and the disaster that happens? …. The tree branch breaks. She falls into the river, but she falls on her behind, and oh, my God, it’s the funniest thing in the whole world!”

Yet there’s a lot of the America’s Funniest Home Video spirit inhabiting Nathan For You, just, you know, with sadness instead of slapstick. Or, put another way, it’s Candid Camera without the smile.

If Nathan For You were directed just a tad differently, you could see it airing on TruTV as one of those zany prank shows. There would be more slow motion replays when a customer does a double take upon seeing, say, an alligator blocking customers from getting to a $1 TV section. There would be wacky sound effects when something goes horribly wrong. And there would be cartoon thought bubbles.

Instead, the tone of Nathan For You contradicts its wacky subject matter. Fielder plays the deadpan straight man to his own absurdity. He mixes the broadest sort of comedy with the subtlest and creates something far more fascinating.

The conceit of Nathan For You has Fielder playing the role of a business consultant. He convinces real small businesses to go along with a crazy scheme to drive up sales: He fakes a pig saving a goat for a petting zoo. He encourages a yogurt shop to sell poo-flavored yogurt to draw local media attention. Famously, he attempts to “parody” Starbucks by rebranding a local coffee shop “Dumb Starbucks.”

As a business consultant, Fielder is your slightly crazy uncle, the one trying to build a perpetual motion machine in his basement, the guy who’s got a “system” to  beat the slot machines, the one who knows in the bottom of your heart that — if you just invest with him for his perfect idea — you’ll strike it rich. But the genius of the show is that Fielder doesn’t channel that character in his performance itself. He isn’t zany or eccentric. He’s soft-spoken and painfully earnest.

The character he “plays” on the show is more like the awkward guy you knew in high school. You know, the shy one who would ask the prettiest girl in school to Homecoming, and then when he’s turned down, he would ask her why, and after she explained, he would politely yet sorrowfully say he understands.

Fielder will ask the business owners if they’d like to hang out, socially, after all this is done. He’ll awkwardly shoehorn in his own personal life and experiences. He’ll set himself, and others, cringeworthy dates. In the last decade, TV has excelled in the comedy of discomfort. The Germans word for it is Fremdschämen: The embarrassment you feel watching the humiliation of others.

You’ve seen this on shows like Louie, in The Office, and Review. But because Nathan for You is a reality show, there’s a different level of authenticity to it. Amid all the goofy hilarity, Fielder gets at a core emotional truth about the desperate lengths we go to be liked and befriended.

In the most representative episode of the show, Fielder convinces a gas station owner to offer an incredibly low after-rebate price for gas. The catch is that to claim the rebate, they have to trek up to the top of a mountain, answer a series of riddles and camp overnight.

One by one, most rebate claimers drop out. The $20 or so they’d save just wasn’t worth it. But a few stay. And as the night drags on, as tents come out and as they talk around the campfire, something curious begins to happen. The rebate claimers begin to talk with each other. They admit dark things about their pasts. They cry. They hug. These are lonely people, in other words. They stay, not because they care about the rebate, but because they’re crying out for human connection.

“I did this whole crazy thing so people wouldn’t redeem the rebate,” Fielder explains to the gas station owner, as sentimental guitar music plays. “But really in the end, I realized more important than any of this, is friendship.” He’s joking. But he sort of isn’t.

A lot of people will laugh at Nathan’s desperately awkward attempts to make friends. They’ll chuckle and cringe. It’s the social equivalent of chuckling at an America’s Funniest Home Videos pratfall. For many people, they will be laughs of mockery. Ah, but for some of us, they will be laughs of empathy. We have been there, my friend.

New episodes of Nathan For You air Thursdays at 10 pm on Comedy Central.

Monday Morning Place Kicker: Everybody won except the damn Seahawks