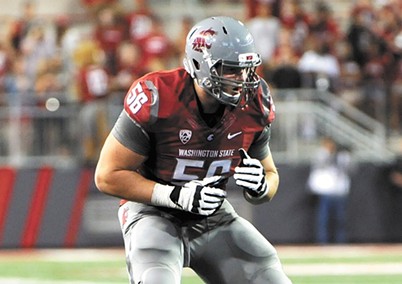 The Oregon State Beavers played so wretchedly on defense in their loss at Arizona, OSU defensive coordinator Kalani Sitake declared, “It can’t get any worse.”
Sitake was wrong. Oh baby, was he wrong.

One week after losing 44-7 at Arizona, the Beavers gave up 45 points in the first half of a 52-31 loss to Washington State on Saturday afternoon at Martin Stadium. WSU sophomore quarterback Luke Falk tied the school record of six touchdown passes – all in the first half – to delight a sellout crowd of 33,952 at homecoming.

“If we have two halves like we did in the first half, we have a chance to beat anybody,” coach Mike Leach said.

The Cougars lost focus after scoring on all seven of their first-half possessions against the frightfully young and inept Beavers. The first half, however, was one for the ages.

“I think that’s pretty safe to say that was the best that we’ve clicked on all sides of the ball (offense, defense and special teams) in one half since I’ve been here,” said offensive tackle Joe Dahl, a senior from University High School in Spokane Valley.

COUGARS MAKING A TITLE RUN?
Midway through the season, the long-suffering Cougars find themselves tied for second in the North Division of the Pac-12 Conference.
The Cougars have finished as high as fourth (tied with Oregon State in 2013) only once since the Pacific-10 Conference became the Pac-12 in 2011 and was divided into a pair of six-team divisions for football.

BOWL ME OVER
The Cougars, who visit Arizona next Saturday (1 pm, Pac-12 Networks), need just two wins in their remaining six games to become bowl eligible.
The team’s overall and conference records are identical to those of the 2013 Cougars, the only WSU team to play in a bowl game (the New Mexico Bowl) since 2003.

BEST PLAY OF THE GAME
Falk was so incredibly hot in the first half, he somehow completed a 23-yard bullet to Gabe Marks late in the second quarter despite the fact that Marks was wearing two defenders like a wetsuit. Falk completed 28 of 33 passes for 323 yards in the first half.

“I felt pretty good,” Falk said. “I felt the guys around me were playing really good, and I just had to get it (the ball) in their hands.”

Falk threw a pair of interceptions after halftime, matching his total in the first 5 1-2 games. He wound up 39 for 50 for 407 yards. Those are dazzling numbers by most standards, but coach Mike Leach briefly had Falk doing “up-downs” – stand, drop to the ground, repeat — on the sideline with a couple teammates in the second half.

“We do up-downs in practice if we don’t do our jobs,” Falk said. “We didn’t do our jobs out here in the game, so Coach Leach decided to do that. We just have to do our jobs.”

WORST PLAY OF THE GAME
Oregon State punter Nick Porebski, a former Australian rules football player from Down Under, wanted to dig a hole down under the artificial turf when he decided to run with the ball instead of punting early in the second quarter.

Porebski limped to the sideline after being crushed by WSU’s Colton Teglovic at the 14-yard line, and the Cougars quickly scored.

Honorable mention: Luani’s 84-yard interception return for a touchdown in the fourth quarter. The junior college transfer streaked down the left sideline, showing off the speed that helped him make American Samoa’s national soccer team when he was in high school.

PLAYER OF THE GAME NOT NAMED LUKE FALK
Senior wide receiver Dom Williams, playing in his first game since the funeral of the grandmother who raised him, set career highs with 11 catches for 158 yards. He caught two touchdown passes to move within seven of Jason Hill’s WSU career record of 32.

“I knew he was going to come out and play hard because that’s what she would want,” Marks said.

Williams was requested in the post-game interview room but did not appear.

STREAKING IS POPULAR AGAIN
WSU has won two consecutive Pac-12 games in a season for the first time since 2013, and just the second time since 2006. The Cougars did beat Washington to end the 2012 season and downed USC to open Pac-12 play in 2013.

LEACH REACHES MILESTONE
The victory was Leach’s 100th as a college head coach. Not that he seemed overly excited about it.

“It’s not everything it’s cracked up to me,” he drawled, “cuz they’ll dump water all over you and you have to change your shirt. That water is colder than you think.”

All things considered, Leach prefers a water dunking over a Gatorade bath.

“That stuff (Gatorade) doesn’t wash off half as easy as you might think,” Leach said. “You find sticky spots like three days later.”

“He’s done a great job throughout his career,” Dahl said. “He’s one of the more brilliant minds when it comes to offensive scheme.”

BOB ROB REMEMBERS WHEN
Longtime WSU radio broadcaster Bob Robertson was greeted enthusiastically by a group of 1950s WSU players in town for the game. Robertson “re-created” many sports events back in the day, including a few games involving those 1950s Cougars. Sportscasters filled in the blanks as they received telegraph messages in the studio after each play. Sound effects were added, and Robertson — who began calling WSU games full-time (and in person) in 1964, even played music from halftime shows that he never actually witnessed.

Larry David plays Bernie Sanders on SNL, and it was perfect