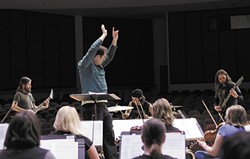 Young Kwak
SFCC Chorale Director Nathan Lansing conducts the school's symphony orchestra in its collaboration with local band Age of Nefilim.
Local metal band, Age of Nefilim, is making a live recording of a performance with the Spokane Falls Community College orchestra and choir tomorrow night. Go check it out.

School board incumbent Rocky Treppiedi saw his chances of re-election slip even further last night. As of the most recent count, 26-year-old challenger, Jerrall Haynes, leads by 774 votes with 3,769 left to be counted. (Spokesman-Review)

Donald Trump will host SNL tomorrow, despite protests. We can only hope he'll meet his counterpart: Drunk Uncle.

Believe it or not, it's time to Zag Up