Believe it or not, it's time to Zag Up 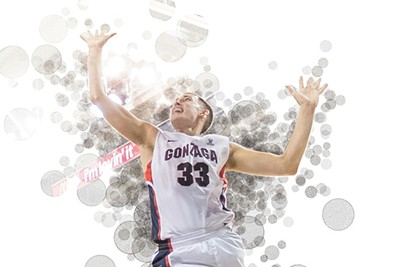 How in the hell is it college basketball season? Weren't we mowing our lawns and eating on patios, like, two weeks ago? What about football?

It's OK. Calm down. The beginning of the college basketball season always sneaks up on us, even people like me who are supposed to write about college basketball. So I understand your surprise in learning that you can now watch the Gonzaga men's basketball team.

At 6 pm Saturday, the Zags play Eastern Oregon on campus at the McCarthey Center. It's not a real game, but rather an exhibition. But you should still watch it, or at least flip to it on occasion while taking in one of tomorrow's many excellent football contests, and that's because exhibition games put the entire roster out on the court and you'll get a look at pretty much everybody. Yes, the Zags will win, and probably by a very big margin, because Eastern Oregon is not equipped to play the No. 9 team in the country.

Here's some things to expect

BIG HUMAN BEINGS: The Zags will have four guys 6-10 or bigger out on the floor, and we'll likely see three of them on the court at the same time. Kyle Wiltjer (6-10), Domantas Sabonis (6-11), Przemek Karnowski (7-1) may very well all be in the starting lineup, although that's yet to be confirmed. Wiltjer would essentially play the small forward spot, which, functionally, is pretty much his position on offense. And then there's Ryan Edwards (7-1). Remember that tall drink of water? He sat out last year hoping the Gonzaga Redshirt Magic that made Kelly Olynyk an NBA draft pick and Kyle Wiltjer a preseason Player of the Year, would rub off on him.

WILTJER FOR THREE: Speaking of Wiltjer, this will be our first look at the lanky forward out of Portland since the powers that be decided that he was the best basketball player in the country — or was going to be the best player in the country. That probably doesn't mean that Wiltjer will be spooked by the accolades, but the aforementioned chance to have more freedom away from the basket could free him up to fire even more long-range looks. At least that's what we're hoping for.

GUARDS: Remember when this happened and freshman guard Josh Perkins had to have his jaw wired shut and had to survive on milkshakes for a few weeks? Yeah, that was brutal. But also, you should remember that before that Thanksgiving-eve injury, he was looking very good at the point for the Zags. And here's the thing: Yes, Kevin Pangos was an amazing point guard and Gary Bell Jr. was the ultimate "glue guy," but this year's crop of guards could actually have just as much upside as that legendary duo.

Just think: Perkins will be fine tuned and then there's Eric McClellan who had to sit out for a while due to transfer rules and injury, but showed flashes of brilliance. Oh, and then there's Kyle Dranginis, who I maintain would be a star if he wasn't on such a talent-laden roster. But we're not done, what about Silas Melson? We saw some of him last year and the dude can shoot. It's an embarrassment of riches.

All right, ready or not, here come the Zags. Again, tip off is at 6 pm and the game is televised locally on KHQ.