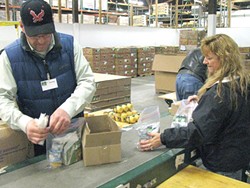 In a 2011 photo, volunteers pack food into boxes for the Second Harvest Food Bank.
The cupboards are looking a little bare at the eight Communities in Schools sites in Spokane and Cheney. Ideally, site coordinators have food to hand out to hungry kids to take home to their families, but supplies are running low.

"We have food pantries in all of our sites, right now most of the pantries are empty," says Chuck Teegarden, executive director of Communities in Schools. "Donations are down to Second Harvest."

That's not necessarily because people are getting less generous, however. Back in the '80s and '90s, Wieber says, big companies like Kraft and General Mills would pump out products like Cheerios or Macaroni and Cheese. But there would be a certain percentage that never sold, and they'd deliver it to food banks.

"They would donate that by the semi-load to food banks," says Wieber.

But with new innovations, more data, and better ways of managing inventory, the amount of extra product that manufacturers write off each year has fallen dramatically.

"They got smarter and got more lean and efficient,"  Wieber says. "They would produce their product as their retailers need it."

And with that, the non-perishable food stores at food banks across the country have fallen. It hasn't been as dramatic on Spokane, Wieber says, as in food banks in spots that, say, were located right next to Quaker Oats.

In fact, Second Harvest in Spokane has adapted in a way that's actually increased the amount of food they have on hand and made it more nutritious.

"As that [non-perishable] inventory level has shrunk, we’ve been able to offset and increase it dramatically with other commodities that are so much better," Wieber says. "We’re handing out million of pounds of fresh produce."

With partnerships with farms, ranches, and dairies, the amount of fresh food coming to the bank has grown dramatically.

That's particularly crucial because the type of low-income people who get food from food banks often bypass the pricey produce aisle, despite its nutritious value.

Still, non-perishables are an important part of a food bank, particularly to give to groups like Communities in Schools. Many of the schools they work with may not have refrigeration space to keep produce fresh.

And there's another problem when it comes to getting produce home with kids, who can be a bit squirrelly at times: "Literally getting produce back home with a child is difficult to accomplish," says Teegarden. "When you have , like potatoes, onions, they have less of a chance of getting home because they’re shaped like balls. Junior high kids, it’s too much for them."

That's what makes local food drives so important. Second Harvest can always use more canned food, in proteins like canned meats, peanut butter and frozen whole grains. Or even better, donate money directly: Second Harvest has the connections to turn  into a bunch of food they need.

Click here to find more information about how to donate or help.