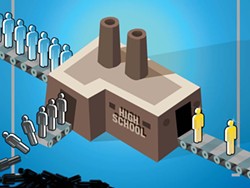 A district could have a perfect "graduation rate" yet still have many of their students drop out.

It’s impressive enough that it’s worth raising an eyebrow.

It turns out that there are dozens of West Valley students not included. And they happen to be the students most likely to drop out.

At Spokane Valley Transition School, another alternative school in the West Valley school district, only 24.7 percent graduated on time.

But if a student drops out at Spokane Valley Transition or Dishman Hills, it doesn’t hurt the district’s near perfect score. When the state calculates West Valley’s graduation rate, it only looks at West Valley High School, ignoring the alternative schools.

It didn’t to be this way.

“We met with [then State Superintendent] Terry Bergeson [and explained], it’s dragging down the West Valley School District graduation rate,” Sementi says. That was unfair, he argued, because most of the students attending the district’s alternative schools were from outside the West Valley school district’s boundaries. Most were transfers from districts like East Valley, Central Valley and Spokane Public Schools.

The Office of the State Superintendent agreed this was a problem. From then on, alternative schools with more than 50 percent of their students attending from outside district  weren’t included within the state’s calculation of district graduation rates.

But here’s the thing: Those students aren’t included in the graduation rates of any district.

In practice, the impact of one alternative school is relatively minimal: The number of West Valley students that attend Dishman Hills is only about five percent of the number of students who attend West Valley High School.

Of course, there are multiple alternative schools in the region. In Spokane Public Schools, students going to Gateway to College or to the Next Generation Zone career center aren’t included within the district’s larger total. He suggests that sending students to these schools further inflates the district’s graduation rate, but only slightly.

“We are guessing it helps about 2 percent,” Fred Schrumpf, Spokane Public Schools director of community engagement for graduation improvement. “It’s not a huge number.”

“You have to take a countywide approach to dropouts,” Schrumpf says. “You can’t just do it district by district.”

TURKEY EDITION: Stories you need to know as you start your day