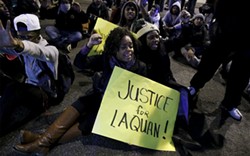 The Daily Beast
Protests have erupted in Chicago since the release of a video showing Laquan McDonald being shot by an officer 16 times.
Beijing residents were told to wear face masks, cease industrial construction, close schools and not use vehicles.

The Supreme Court has decided not to review an assault weapons ban
A Chicago suburb put the ban in place two years ago and it was challenged by a state gun association.

The Spokane Fire Department warns the public of an imposter
A man posing as a firefighter has been entering people's homes to inspect smoke detectors and then calls back later to say the resident has won a prize, KHQ reports.

The Department of Justice announced it has launched an investigation into the Chicago Police Department
The DOJ will look into the department's use of deadly force and systematic misconduct. This follows the conviction of a white police officer for fatally shooting Laquan McDonald 16 times, which was caught on a dashboard camera, and other officer-involved shootings.

Monday Morning Place Kicker: The Cougs are headed to El Paso, the Zags struggled, Gonzaga Prep won state, and the Seahawks are back, baby!

Sleighbells, Santa and snow: What are the criteria for a great Christmas song?