Straub's cushy job, and other news of the day 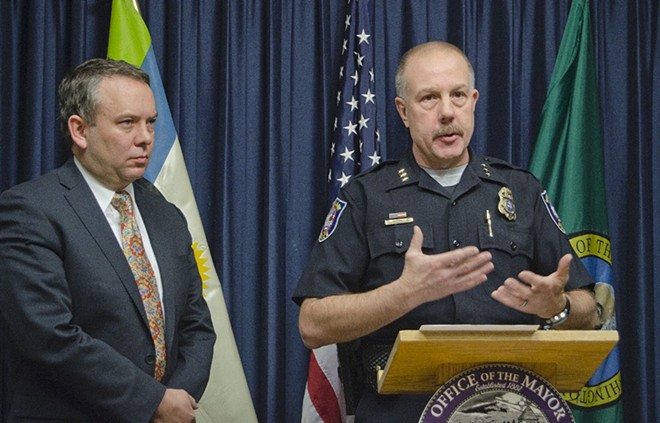 $22 a word
Former police chief Frank Straub is finished with his homework, the Spokesman-Review writes. For writing less than a local journalist writes in a week over three months, Straub was paid more than a local journalist makes in a year. He did, however, use the space to level accusations at the police department, explaining that the "old guard" was hurting reform efforts. “I tried to break the ‘stranglehold’ these officers had on the department, in the end, it contributed to my termination, as it ended the tenure of previous chiefs," Straub wrote.

What? You'd prefer Comcast?
More than 500 Centurylink customers still haven't had their internet service restored after the storm a month ago.

Snow day
KREM has your list of school closings.

SimTower
What Duane Hagadone's proposed new 12-story CDA Resort tower will look like, as revealed by the Coeur d'Alene Press.

Those Nancy Reagan PSAs are finally working
Drugs just aren't that cool anymore. Despite marijuana legalization in states like Washington and Colorado, drug use among teens continues to dropping.

Page Turning
Slate looks at a curious case of  a bookstore chain that is still selling actual books.

Santa and the Spokane Indians team up today and Thursday

BlueStar's former VP pleaded guilty to fraud. Here's who he is