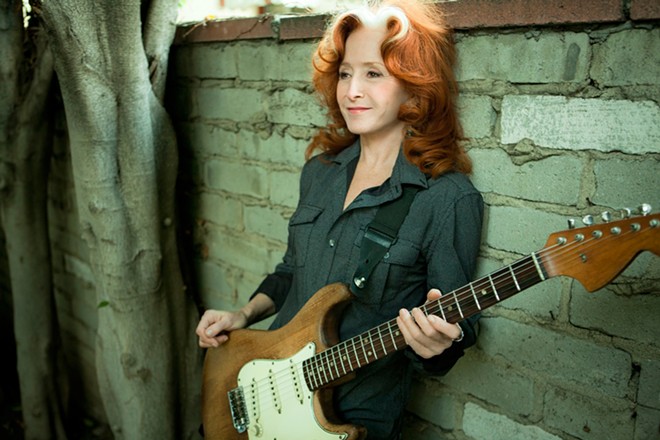 Is a concert really happening if an announcement doesn't tell you where the artist is playing?

We'll have to wait a while to hear where Bonnie Raitt is going to strap on her six-string and slay the joint with songs from her new Dig In Deep album, arriving Feb. 26, but we just got word from her publicist that Raitt will be in Spokane for a show on Wednesday, Sept. 14.

The announcement makes no mention of exactly where the show will be, so you'll have to watch this space or Raitt's website for updates. On-sale information will be made public on March 3, but if you're a big fan of the blues-rock pioneer, you can sign up for her mailing list and get word on pre-sales and opportunities coming during February, before tickets go on sale to the public.

UPDATE: Raitt will play at the INB Performing Arts Center, and tickets go on sale for the Spokane show on Friday, March 25, at 10 am. Prices are $40, $65, $75 and $85, and available through all Tickets West outlets.

The show is part of a 21-date run added to the tour for her 20th album, and she'll be joined by her long-time touring band: James "Hutch" Hutchinson (bass), Ricky Fataar (drums), and George Marinelli (guitar), along with Mike Finnigan (keyboards).

Raitt first came to prominence in the 1970s for her stinging slide-guitar style and rootsy albums blending rock, blues, folk and country aspects. She hit her commercial peak in the late '80s and early '90s with some huge albums like Nick of Time, which earned several Grammy Awards, including Album of the Year, and sold millions. She's stayed in the public eye since through solid albums, some hit singles like "I Can't Make You Love Me" and political activism for various environmental causes, from supporting the No Nukes movement to playing benefits for tsunami victims.

8 things to give up for Lent

Our next Suds and Cinema brings food, beer and film together