FILM: How to Be Single feeds stereotypes and is largely forgettable 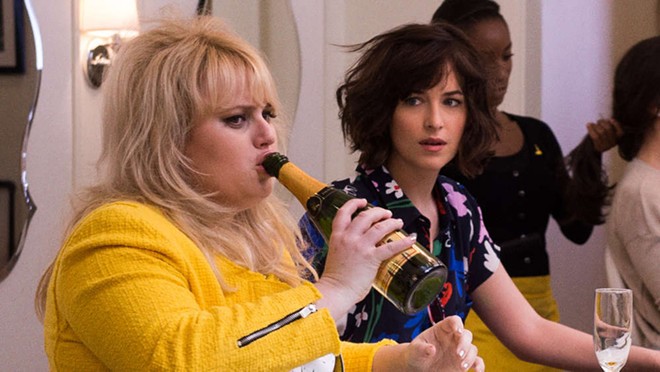 There are two types of singles on a Saturday night: the one who, panty-clad and smiling, paints onto a canvas what her heart desires, and the one who, wearing tights and push-up bra, swings from the chandelier with a bottle of champagne in hand. Both are sexy, independent women and together make up the essence of singleness — freedom and solitude. Separated, and they are overwrought silhouettes of drama and spectacle.

We see both of these types in How To Be Single, when Alice (Dakota Johnson), who plays the good-girl-turns-bad and Robin (Rebel Wilson), the wild coworker who forgets who she slept with the night before, become best friends. After leaving her long-term college boyfriend, Alice starts a new job in New York City with the intention of "finding herself." Of course, Robin spices this goal up by taking Alice out to party and enjoy the single life in a cross between Miley Cyrus’ foam finger and Fifth Harmony’s sass.

Young director Christian Ditter stoops low when he feeds the stereotype of newly single women being boozy, sex-crazed party animals. Considering the film features single women, it might have been more fitting for a female director to apply her perspective in instructing, as the title indicates, how to be single.

At first, there is casual sex, alcohol, partying, and flirty-tigress-overload. Wilson takes center stage with her hilarious sense of humor and inflated confidence, largely a continuation of her work in Bridesmaids and Pitch Perfect. Weaved throughout are moments when Johnson's Alice is insecure and lonely, as she tries to rekindle her past college relationship or is let down by possible partners and runs to her sister for solace. These lapses are akin to a child who can’t part with their binky (which is understandably often the case in transitioning from companionship to solitude).

Then, too abruptly for coherence, things turn serious. Robin makes fewer appearances (unfortunately robbing us of Rebel Wilson's comedy), when Alice realizes that, in fact, booze and hooking up do not induce self-discovery. Although the backdrop of the free-spirited and liberated lifestyle remains, the film quickly moves into phase two, in which the binky is torched and the woman muscles her way through the single life with grace and fervor.

This shift forces Alice to experience solitude, and it's counterpart — loneliness (which is heartache over the absence of companionship) — is rightfully sidelined. However, Alice slides into the pre-established profile of what a single woman ought to be: strong, book-reading, waiting.

Had the film combined the book-reading and party-going perspectives in a cohesive hybrid of single life, Alice’s story might have been a modern genre flick manifesto of what it means to live, especially in busy New York City, as a single person. That is, it might have given viewers something they weren’t expecting. How to Be Single is a watered-down version of Sex in the City and variant of He’s Just Not That into You — simply put, it is largely forgettable.