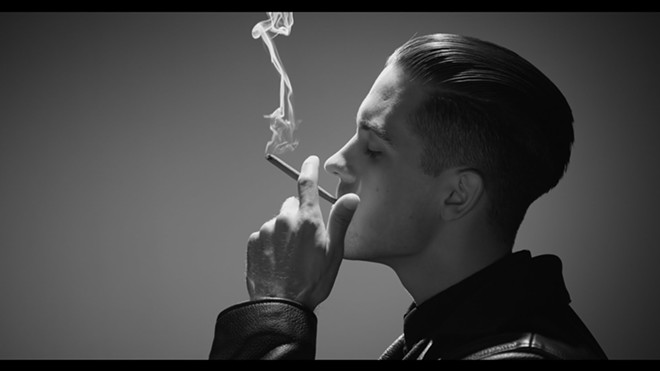 G-Eazy has plenty of haters, but that hasn't stopped him from selling out every show he's done this year.

The rapper is all slick hair and black clothes. He combines quick, narcissistic flows with catchy, vapid hooks. He is especially popular with the young ladies. And April 7, G-Eazy comes to the Spokane Arena as part of his When It's Dark Out Spring 2016 Tour; his December-released album aptly has the same name.

Selling out every show so far this year, G-Eazy, aka Gerald Earl Gillum, is seemingly taking the world by storm. The 26-year-old’s Spokane show will be at the Star Theatre at Spokane Arena, meaning only one side of the arena is open for seating, making the concert far more intimate (an aspect of the Spokane Arena its bookers should take more advantage of with other cool shows).

The Oakland-based rapper has been a staple at various music festivals throughout the last couple years, with two albums doing well on the Billboard Charts. His latest single “Me, Myself, and I,” is currently killing it on iTunes and Spotify (150 million-plus plays).

Pre-sale tickets go on sale tomorrow, otherwise tickets officially can be purchased Friday at 10 am. Tickets are $29.50 and $39.50 and are available at the Spokane Arena, TicketsWest.com, or at 800-325-SEAT.