We hit opening night at the new Spokane Comedy Club. What you need to know 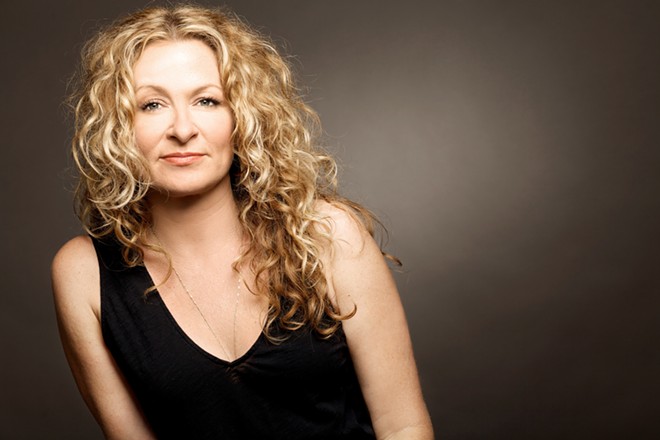 Sarah Colonna has three more shows at the Comedy Club this weekend.
Going up against St. Patrick’s Day shenanigans and Gon
click to enlarge

That classic brick wall stage backdrop.
zaga men’s basketball taking down Seton Hall, the Spokane Comedy Club’s first show was absolutely packed in last night at 8 pm. Sure, people were there in their green beads and Zags gear, but Spokane showed up to see what the new place was all about.

The downtown space (formerly Big City Saloon) has come a long way since we last checked in with the owners at the beginning of the year. It still offers that spacious, open feeling, but the floors and windows have been blackened. The lighting and sound systems accentuate the room well but aren’t distracting. The stage isn’t large, but offers enough height for folks in the back of the room to easily see the comedian.

Headliner Sarah Colonna arrived on stage last night with her pants on. She had a lot to say about her vagina, online dating, long-distance dating, her NFL-playing fiancé (Seahawks punter Jon Ryan), old boyfriends and a one-time lesbian experience. Colonna is a favorite performer of the Tacoma Comedy Club, the Spokane Comedy Club’s sister, and Colonna was most gracious to the owners for the opportunity to open. At one point she riled up the crowd by asking if anyone was voting for Trump. There were some whoops of approval, and then came the booing from others. Colonna quickly veered in another direction. All in all, she kept people laughing hard all evening long.

As an extra treat, fans got to take their photo with Colonna and her boo Ryan after the show. The line snaked to the back of the room but people were more than willing to wait.

A few pointers for those hitting up the club in the near future:
- That two-item minimum per person is for real. Sodas are $3 and alcoholic drinks range from $4 Bud Light bottles to $12 specialty cocktails. Food consists of popcorn and candy items, $5-$7. Also, the servers are still getting the hang of everything. Be kind.
- If a show starts at 8 pm, don’t show up at 7:58 pm. You will be the last one in the room and they’ll have to escort you to your seat. The doors do open an hour before the show. Early is good.

Sarah Colonna plays through Saturday and Jamie Kennedy takes the stage Sunday. Upcoming acts to get your panties in a bunch about include Tom Segura and Craig Robinson. Check out the whole lineup here.

Stuckart asks mayor to compel participation in the Straub investigation