Stuckart asks mayor to compel participation in the Straub investigation 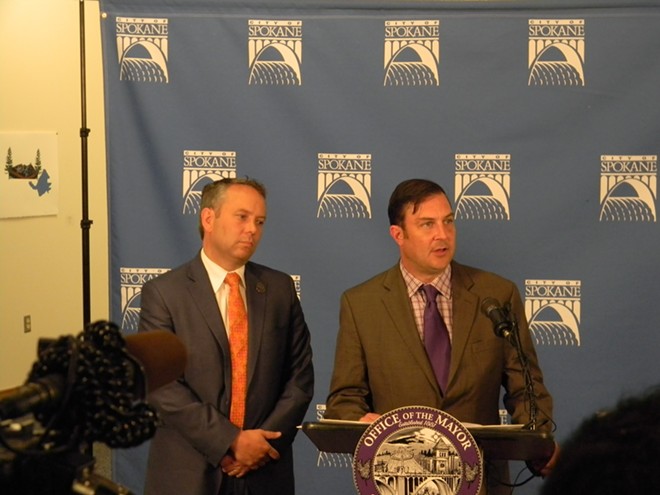 It's raised the possibility that after Kris Cappel's entire investigation — costing up to $48,000 — is finished, the city will still have major unanswered questions.

A February letter sent to city employees from City Council President Stuckart and Mayor David Condon encouraged participation, but made it clear it was optional: "It is important that you understand you will not be retaliated against for participating or not participating in this investigation."

On the other hand, Stuckart has repeatedly said the council will invoke its subpoena power if major questions remained after the investigation is completed.

"I thought that by us asking and requesting that people talk, they would," Stuckart says. "Now we have a very important witness that is refusing not to testify."

After reading the Inlander's reporting that Jacobson would not participate, Stuckart lit upon another possible solution. Last week, he sent a letter to the mayor encouraging the mayor to use The Garrity Rule: Require employees to testify, and simultaneously protect them from criminal prosecution.

Here is that letter:

In light of recent reports that certain employees are refusing to speak with the investigator, I believe we should be proactive instead of addressing this at the end of the process. As we agreed, this is a joint investigation by both the mayor's office and the City Council with the goal of finding out the truth. To that end, if people do not speak with Kris Cappel, we will not understand what happened.

This is better than waiting until after the investigator is finished. If, at the conclusion of the investigation, we find that we do not have the full story, the Council may have no choice but to invoke its power under the Charter to subpoena witnesses. I also believe that you would be protecting our employees by requiring them to interview, because they would be protected from criminal liability.

The Garrity Rule stems from a 1967 Supreme Court case, Garrity V. New Jersey. Basically, the Supreme Court found that compelling city employees to testify, and then using that testimony in criminal prosecution, is unconstitutional. From that, came "Garrity rights." The rule of thumb: Cities (or states or the feds) can use the threat of termination to require testimony, but if they do so, that evidence can't be used in criminal prosecutions.

Once a city invokes the Garrity Rule, the Supreme Court ruled in 1970, it takes away the ability for employees to simply plead the fifth. Without the threat of self-incrimination, the fifth doesn't apply.

If the city employees still don't want to participate in the investigation?

"They could be fired," Stuckart says. (That, however, would appear to be a consequence for "not participating in this investigation.")

Stuckart says the mayor has not replied to his letter yet, though Stuckart plans to meet with Condon next week. City Spokesman Brian Coddington did not immediately return phone calls from the Inlander about whether the mayor would compel testimony in the Straub investigation.

The Garrity Rule is not some obscure legal term of art unfamiliar to Spokane, either. The city has used it before. Former Police Chief Anne Kirkpatrick invoked the rule after Sgt. Dan Torok shot and killed a 33-year-old transient in 2007. At that time, the Spokesman-Review quoted the Seattle Police Guild as saying Garrity rights were "used as much as 10 times per week with officers in their department."

In fact, it's literally included in the city's Use of Force Commission Recommendations, in concert with discussing the power of the police ombudsman.


The ability to conduct an independent investigation is severely undermined if the Office of the Police Ombudsman does not have the authority to require the cooperation of all City employees and agents, and to secure all necessary records. All City employees and agents, as conditions of employment, should be required to truthfully and completely answer all of the Office of the Police Ombudsman inquiries and fully comply with all requests for records. Appropriate policies and procedures should be adopted so as to extend the protections put forth in Garrity v. New Jersey, 385 U.S. 493 (1967) to employees who are required to appear and provide testimony (i.e., compelled statements related to an employee’s job and job duties have immunity in any subsequent criminal prosecution of the statement maker).

The Use of Force Commission, appointed by Mayor David Condon, goes on to say that the city should inform employees of their "obligation to truthfully and completely answer all questions asked by the Ombudsman as a condition of employment." If they still don't cooperate, the Commission recommends, the ombudsman should file a "formal complaint of misconduct."

In other news, due to scheduling challenges, the Center for Justice's Rick Eichstaedt says the next ethics commission hearing on Condon's statements about Straub has been pushed all the way until June 29.

"Apparently the mayor's lawyer is not available until then," Eichstaedt says. "We're fine with it, because I would expect the independent investigation report will be out then."

We hit opening night at the new Spokane Comedy Club. What you need to know

Spokane was home to the biggest upset in the NCAA tournament...for a few minutes