Idaho loves Bernie, the GOP establishment loves* Ted Cruz and other news of the day

Go Gon$aga
• How much will you have to pay to satisfy the Basketball Jones within you and follow the Gonzaga men's basketball team to the Sweet Sixteen? Dan Nailen does the math.

A Band Built For But One Purpose: To Spill
• Built to Spill is coming to Spokane on June 29.

Smoke 'Em If You Got 'Em And 'Em Are Legal In Your State
The Supreme Court decides not to take up a challenge to legal pot from states bordering Colorado. Does this mean 'Bong Hits 4 Jesus' are okay after all? If Jesus is in Colorado or Washington, yes.

More like the " Search," ?
• The Ombudsman who was waiting his work visa? He didn't get his work visa approved. (Spokesman-Review)

When Matt Shea Came To Town
• The Spokesman-Review follows up on that Oregon Public Broadcasting story about Rep. Matt Shea's attempt to intervene during the occupation of the wildlife refuge in Oregon. (Spokesman-Review)

It depends on what the meaning of "awful legacy" is.
The Spokesman-Review Well- the Clinton Gaffe, noting that while Clinton may believe the last 7 years have been awful, he's probably not saying "Thanks, Obama" for that awfulness. (Spokesman-Review)

THERE
Do I smell a Sanders/Cruz Unity Ticket?
• In the mile-long-line marathon mess of the Idaho Caucuses, Bernie Sanders reigns supreme in Idaho. (Spokesman-Review)

The Family Business. Terrorism. We're Talking about Terrorism.
Two of three suspects in the Brussels attacks have been identified. (NYT)

*Love and/or favoritism of Mr. Cruz may or may not be impacted by hatred and/or fear of the electoral devastation Donald Trump threatens to reign upon the Republican Party, including congressional, gubernatorial, and state legislative races. 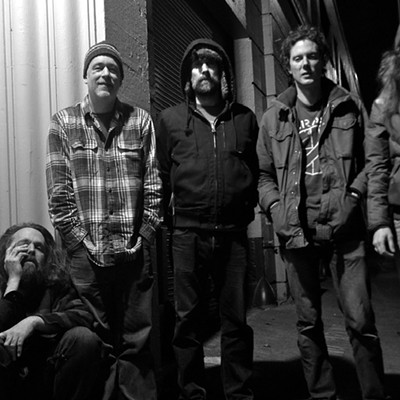 Built to Spill headed to Spokane for June 29 show