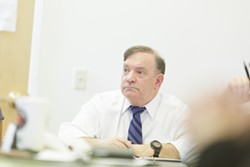 Around 10 pm January 30, 2016, Jerry King wandered through traffic at W. Francis Avenue and N. Assembly Street, eventually approaching the home of Kevin and Christina Elliot, who were watching TV. King was drunk and had been smoking marijuana, according an autopsy report.

King, 39, who was living two doors down from the Elliotts at the time he was shot, was yelling outside their home, prompting Kevin Elliott to get his gun.

The two men traded threats, and Kevin Elliott demanded King remove himself from the porch. King ignored the instruction and attempted to break down the glass storm door, according to Kevin Elliott. He then fired once, striking King in the chest, killing him. King was unarmed.

County prosecutors opted not to charge Kevin Elliott, saying he "was in his own home and had no duty to retreat."

King's family does not agree with the prosecutor's decision not to file charges, the Spokesman-Review is reporting.