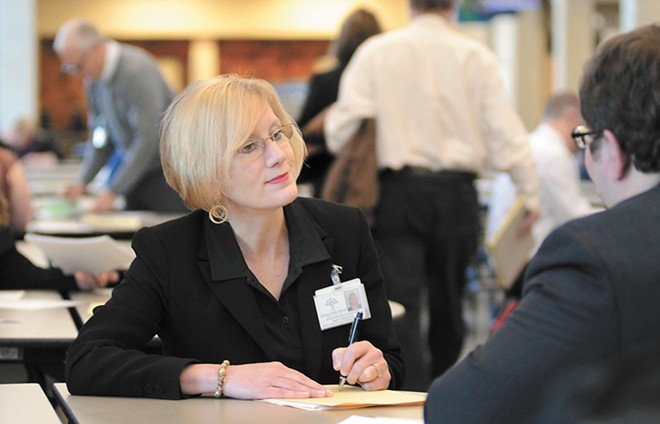 Mike Salsbury
Mary Templeton interviews teaching candidates at a Spokane Public Schools hiring fair in January
With Washington in the midst of a teacher shortage, school districts have been recruiting qualified teachers more aggressively than ever. A couple weeks ago, state lawmakers passed a bill that gives districts more tools in pursuing candidates.

What the bill did not include was a higher teacher salary, which teachers unions argue would be the best plan to address the shortage. Gov. Jay Inslee proposed raising the minimum teaching salary to $40,000 per year — a raise of about $4,300 — and a 1 percent salary adjustment for all other teachers in the 2016-17 school year. The state House also supported modest pay increases, but a pay raise was blocked by the Senate and not included in the final bill.

A survey conducted by the Association of Washington School Principals last fall found that 45 percent of responding schools were unable to fill all of their open positions with fully certified teachers. Spokane Public Schools started recruiting teachers earlier than ever this year, as the Inlander reported in January, but it's often the smaller, more rural districts that are left out of the running for qualified candidates.

Still, at least from the perspective of Spokane Public Schools, Senate Bill 6455 should help shrink the teacher shortage. And even without the bill, Spokane may not have had much of a shortage for next year at all, according to Mary Templeton, SPS director of certified personnel.

"I think everyone is going to say the bill is great," Templeton says.

It includes money for mentoring new teachers, expands alternative route programs and enables potential grants for aspiring teachers. Under the bill, classified K-12 employees who take college courses relevant to their work assignment will be eligible for tuition waivers.

Thanks to early recruiting this year, Templeton says the district is already on track to fill all of its teaching positions, including in science and math — often the most challenging subjects to fill. Special education teachers are in highest demand, but Templeton says the district has hired about a dozen for next year.  The bill would also allow retired teachers to become substitutes without hurting their retirement benefits, which Templeton says should help with the pool of substitutes. The substitute teaching pool now is around 600, the highest in years and much higher than it was at the start of the school year.  "This new bill just opens up the opportunity for folks to participate in subbing without seeing a penalty for continuing to give back," she says.