A Spokane County sheriff's detective's Facebook page is dotted with memes, videos and links to articles that trash the Black Lives Matter movement, espouse an "us vs. them" attitude and at times diminish the role of race in police interactions.

Damon Simmons, an African American detective for the Spokane County Sheriff's Office and a former officer in Great Falls, Montana, recently shared a meme on his public Facebook page from the Operation Officer Down — A program of the NAIDW page. Over an aerial photo of the recent flood in Louisiana are the words:

"NO BLM OR BLACK PANTHERS COMING TO HELP. ONLY THE POLICE, NATIONAL GUARD, AND LOCAL GOOD SAMARITANS. BUT THAT'S NONE OF MY BUSINESS."

This post — and others on Simmons' page — offer a  into conversations about Black Lives Matter and community and police relations among some local law enforcement, both active and retired. Under the Louisiana flood meme, NAACP Spokane President Phil Tyler (who was a lieutenant in the Sheriff's Office as a corrections officer) commented that Simmons' post was "distasteful," and that "professionals should be more professional."

"If we're going to say black lives matter, well, we're all one race," Simmons tells the Inlander. "All lives should matter. There needs to be a wake-up call there."

Simmons also expresses frustration over what he calls "racial anxiety."

"Every time something bad happens, it's easy to fall back and say it's because I'm black or Hispanic or Mexican or Muslim," he says. "You can't use race as a crutch, and unfortunately we've forgotten that and we've fallen back on it."

Numerous reports and investigations have also found racial disparities in policing across the country.

From Tyler's perspective, the meme serves no purpose but to drive the wedge between police and community deeper.

"When you share those things, you represent the organization," Tyler tells the Inlander. "So people cannot believe you're going to have any level of fair policing when you go to police them. As law enforcement personnel, it's at least troubling, and at best it's speaking to the exact narrative that's causing so much strife in these communities who say there's bias in policing."

In response to Tyler's comment on his page, Simmons defends the meme, saying it "speaks the truth about what's turning out to be a total disgrace and slap in the face for what every civil rights leader (no matter of race) has ever done in this country."

In case you're wondering, JD Allen is a deputy in Shoshone County. Sherilyn Redmon, who seems to come to Tyler's defense, is a neighborhood conditions officer for the Spokane Police Department.

Tyler also the meme on his own page expressing frustration with a "local law enforcement member." (Tyler did not identify Simmons by name to the Inlander.) 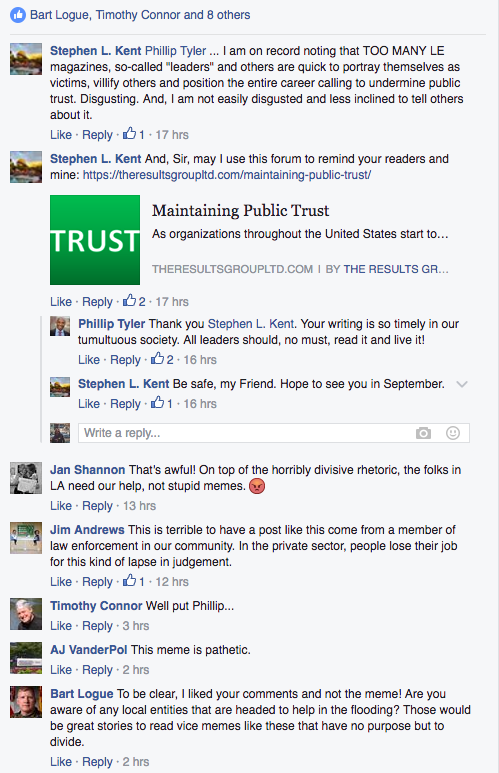 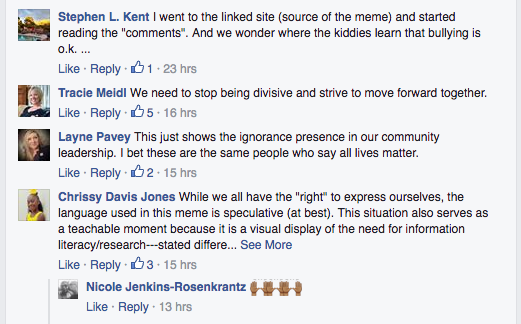 Simmons' post comes about two weeks after his boss, Sheriff Ozzie Knezovich, penned an article articulating the power of words and rebuking the incendiary comments coming from "talking heads" nationwide in the aftermath of recent officer deaths. After eight officers in Dallas and Baton Rouge were killed, Knezovich struggled with requests from the media to provide a comment.

"Words are very powerful — as powerful, if not more powerful, than any weapon made by man," Knezovich wrote. "For it is how we use our words that us to use those weapons."

In a conversation last week, Knezovich expressed extreme frustration over "finger pointing." He feels that the media narrative nationally and locally has a penchant of highlighting controversy, which, he says, drives divisions instead of building bridges.

"We can continue to keep pointing fingers at each other, or we can fix it," he says. "All this is doing is causing bad blood in the community."

Recently appointed SPD Chief Craig Meidl talked with the Inlander recently for a cover story laying out the challenges he'll face as police chief (if he's confirmed by the city council tonight). We asked him what the Black Lives Matter movement gets right and what it gets wrong.

"I believe the Black Lives Matter movement would be stronger and gain more support if they could find a way to mitigate those who have a more violent message," Meidl says. "My concern with the phrase 'Black Lives Matter' is that those who started that movement with the best of intentions have had their hijacked by the group who is promoting violence.

"And some who are associating with Black Lives Matter are actually coming out and endorsing the killing of police officers."

In an age when social media has become much more influential, comments from officers and civil servants nationwide have resulted in discipline, and in some cases, termination. Indeed, one of the final three candidates for Spokane's police ombudsman was soon disqualified for his comments on Black Lives Matter last year.

"It's a very unhealthy job," Simmons says. "When you're working a job so mentally and physically draining — not everyone handles stress the same way. I think the public has become selfish, and can overlook that. At the same time, law enforcement can't fall into that contempt of cop mentality: 'you don't talk that way to me, I'm the police.'"

Simmons acknowledges the importance of fostering a healthy relationship with the community he serves. Non-hostile, rational communication is the solution, he says.

Below are some other posts on Simmons page:

Brian Hirzel was fired from the Sheriff's Office for "improper use of county-owned vehicles." Hirzel was also cleared of wrongdoing in the controversial shooting death of Pastor Wayne "Scott" Creach. More of Hirzel's comments below: 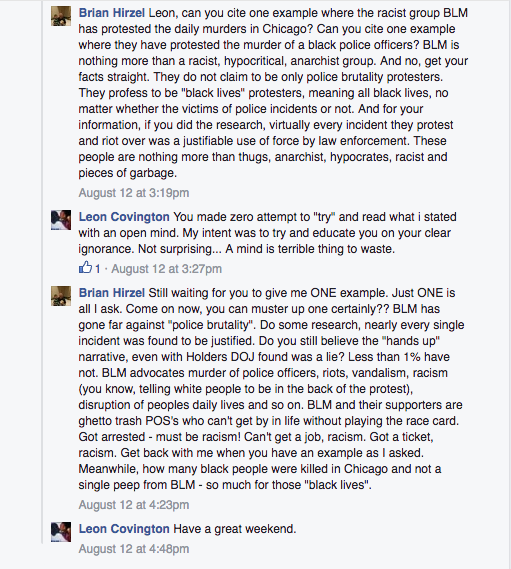 In a post from July 25, Simmons shares a video from PragerU, an ultra-rightwing conservative site.

Another, in which Simmons says black people don't care about intraracial violence: 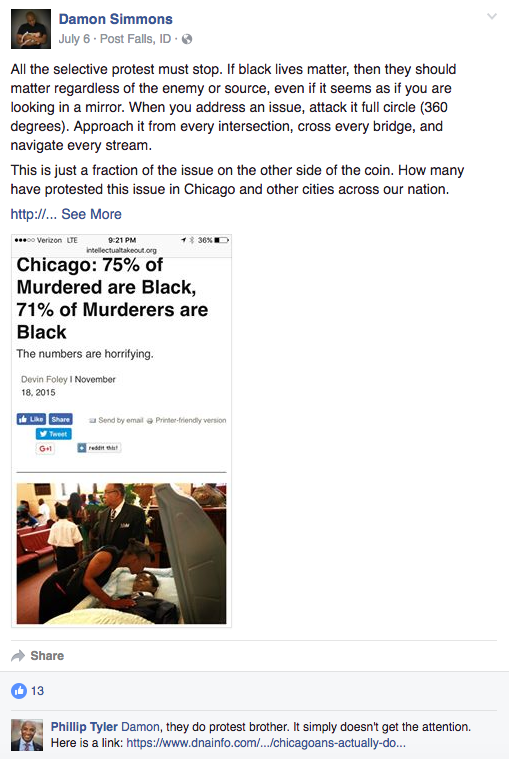 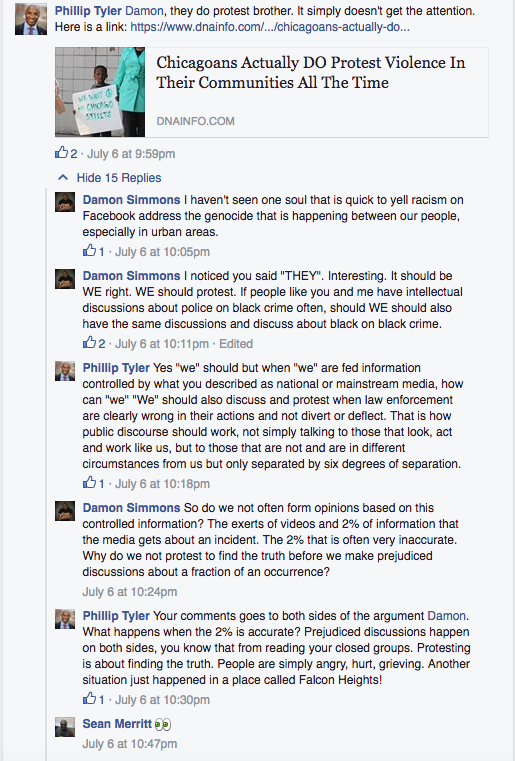