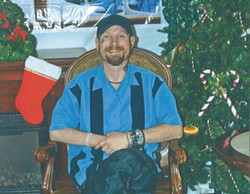 Aaron Johnson, pictured during his most recent stay at Eastern State Hospital.
The two Spokane officers involved in the shooting of 32-year-old Aaron Johnson outside his room at the West Wynn Motel will not face criminal charges, according to the Spokane County Prosecutor's Office.

Johnson was hospitalized after the May 2 shooting, but he survived. He has been locked up in the Spokane County Jail ever since. This is the second time in three years police have used lethal force against Johnson. He was shot by officers outside Truth Ministries Spokane in 2014. The officers were not aware of this before arriving at the motel, Capt. Tracie Meidl says.

Spokane police released redacted police reports and body camera footage from some of the officers involved in addition to surveillance footage from outside the West Wynn Motel during a news conference Wednesday.

The released information includes body camera footage from Officer Stephen Anderson, who was present at the time of the shooting, as well as footage from other responding officers.
The footage does not include that of Officer Shane Phillips, who shot at Johnson nine times, striking him six times.

At the time of the incident, Spokane police were having issues with their body cameras, Meidl says.

Meidl explains some officers would turn their cameras off to preserve battery life, which was the case for Phillips. Within the past couple months, every Spokane police officer has received a new, upgraded body camera, though an official policy telling officers exactly how and when to use those cameras has yet to be approved.

The video footage from the body camera of Officer Anderson is embedded below. (Warning: It contains graphic images.)

The video footage released seems to be consistent with officer reports and dispatch reports.

According to a summary of events written by the Spokane County Sheriff's Office, on May 2, 2016, at around 2:36 p.m., 911 received a domestic violence call from Johnson, who was staying in room 217 at the West Wynn Motel. Johnson said that he had been assaulted by his roommate, Brian. Johnson would not answer questions and hung up, saying that he was afraid that Brian would call back.

At this point, no officers were dispatched and the call was classified as a low priority in response because there was no immediate threat, Meidl says. Officers Phillips and Anderson later self-dispatched to the call around 3 pm.

While the officers were en route, Johnson called 911 a second time; Brian had threatened to kill him with a knife, he told dispatchers, but he was unable to give a description, according to the Sheriff's Office summary. The third and final call was an outgoing call from 911 dispatchers to Johnson around 3:11 pm, where Johnson said that the man was now trying to shoot him.

Phillips and Anderson arrived about a minute after the last phone call. They made their way toward room 217.

"I knew that we were advancing toward a potentially very dangerous situation," Phillips writes in his report. "The door, number 217, was open approximately six inches, which increased my suspicions that this call was not what it appeared."

"I knew that we were advancing toward a potentially very dangerous situation."

Officer Anderson knocked on the door and announced "Spokane police," which can be heard in his body camera footage.

"I pushed the door open to check the welfare of Mr. Johnson," Phillips said in his report. "I clearly saw a dark figure standing at the back of the room, facing out toward us. He was literally standing there with a gun in a shooting position."

"It was clear now he set up to shoot responding officers," Phillips writes in his report.

"Concerned about possible crossfire, Officer Anderson exited the motel to the east to join Phillips on the west. In the meantime, Johnson entered the hallway and proceeded to approach Phillips with his gun in hand and fully extended in a shooting position," the prosecutor's office statement says.

Phillips yelled for Mr. Johnson to stop and commanded he get down. Phillips received no response to his commands, Phillips writes in his report. Wohl says Officer Phillips fired nine shots within three seconds, hitting Johnson multiple times in the side and back. Johnson was transported to Sacred Heart Medical Center and treated for his gunshot wounds. Prosecutors have charged Johnson multiple counts of assault.

Johnson's gun was found to be a realistic-looking BB gun, according to the Sheriff's Office summary. Meidl says that Johnson suffered from mental illness and a suicide note was found in the motel room.

When this incident occurred, Wohl says, there was no way to alert officers to the fact that Johnson had been shot by police once before.

"And so one of the recommendations is to look for radio being able to say, 'This person had [been] involved in a previous encounter–violent encounter–with police or with civilians,'" Wohl says. "So that kinda gives us an idea of what to expect, at least knowledge as we go into the call. So that’s something that we learned from this situation."

Spokane police are currently looking to implement a communication and database system for distributing such information to officers.

Two other men were shot by police within days of Johnson's May 2 shooting. Police shot Charleston Harper in front of a downtown bar May 1. Mike Kurtz was shot and killed near the House of Charity on April 29. Kurtz held a knife to his chest and yelled at police to kill him. Harper is currently booked into Spokane County Jail on burglary and harassment charges.

Between January and June 2016, Spokane Police received 556 phone calls that were classified as suicide. Out of those 556 calls, five involved police use of force and one was fatal.

Here is the body-camera footage provided by the Spokane Police Department in the Johnson case: