Some streets wear their stories on their sleeves.

I've never been a visual sort of reporter.

My reporter-brain thinks in ideas — ironies, contradictions, themes, trends — instead of images. But ever since I've started biking home from work with my camera bag slung
my shoulders, I've tried to change that. I'll see something strange or quirky or just beautiful, skid to a halt and snap a picture.

In many neighborhoods, I never find a reason to stop. One stretch of suburbia rarely distinguishes itself from the other.

That's not the case in West Central, where the unique and remarkable are absolutely everywhere. It was on a ride home last month that I snapped this picture of Bridge Avenue:
click to enlarge 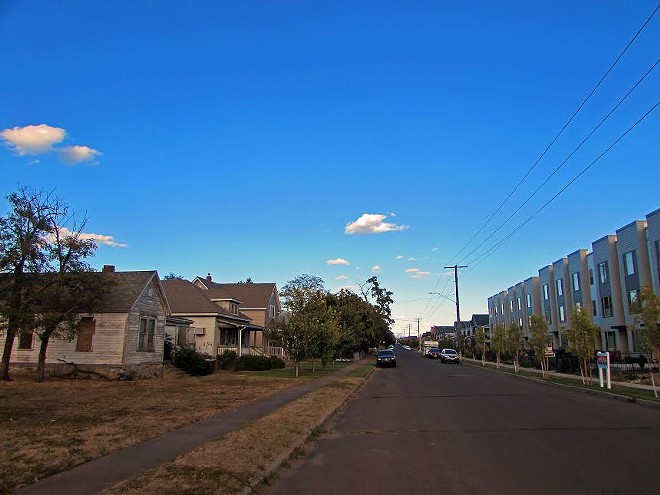 And once I started doing some basic reporting — talking to neighbors sitting on their porches, building a spreadsheet out of County Assessor data, attending events and meetings, and requesting records — that story grew increasingly fascinating. It went from interesting to news story, to cover story.

I found the home owned by the City of Spokane Chief Financial Officer Gavin and learned that it had been vacant for eight years, as he's waited for the right time to either reinvest or sell the property.

I talked to Realtor Bottler, who bought a house on the West Central side of Bridge on the exact day the housing market crashed back in 2007.  She said the moment she put it on the market this year — “DIRECTLY across the street from Kendall Yards!” the Craigslist ad bragged — she was flooded with offers. She had it rented out the same day, and could now charge $935 a month, more than double the $450 she used to rent it for back in 2008.

I walk down the street and a little girl who lives with her mom and her aunt and her siblings and cousins on Bridge hands me the top of a yellow flower — no fear of strangers here. I thank her and place it ceremoniously in my camera bag.

A 14-year-old kid named Jordan McBride, who lives in the brown duplex on the West Central side of Bridge, asks me — softly and politely — if I need any yard work done. He says he’s willing to mow, water or rake. He says he's hoping to raise money to buy more school clothes. With weeds growing up in more than few yards nearby, the landscaping opportunities abound.

“Most of them don’t have much though,” McBride says about Bridge Avenue. “It depends on what time of the month.” He says he's typically had more success over along the western edge of West Central, where the homes are a little on the higher end.

He's lived on this street for 10 and grew up watching the construction of Kendall Yards. When he looks across the street at the Kendall Yards homes, he sees inspiration.

“” he says he thought as the houses as they were being built. “I want to be an architect, so...”

I talk to Mick Akin, who's standing in front of a house with stray cats and broken-down steps. He said his brother lives there, that he has prostate cancer and doesn't get around so good anymore.

Akin refers to the Solo Loft condos as “big, giant monstrosities.” And despite police insistence that location doesn't influence whether the cops investigate a crime, Akin feels like there's a double standard with police response on Bridge.

“When they call from Kendall Yards, the cops are here in a minute,” Akin says. “But when you call from here ... they’ll say ‘we’re really busy, we’re so sorry, we’ll try to send somebody up there. There’s no guarantees.’ Nobody fingerprints. Nobody comes by.”

I try to talk to the elderly woman watering her tomatoes growing in her front yard. She shakes her head and says "Russian." I respond with "spasiba" — "thank you" in Russian— and she beams and attempts to have a conversation in her native tongue. (Unfortunately, my Russian vocabulary ends there.) Her house is one of four Habitat for Humanity homes on Bridge, sold to low-income homeowners a decade ago.

I speak to longtime residents like Carol Ellsworth, who takes a moment away from trimming her plum tree to talk about how how crime has declined in the neighborhood.

I talk to neighborhood legend Bea Lackaff. The pathway to her house is almost completely swallowed up by her thick green garden that swarms around her fence. She talks about how she was worried about Kendall Yards being too cookie-cutter, but is mostly been pleased by the townhomes across the street from her.

Still, she acknowledges that she wouldn’t be happy if she lived a few blocks to the west, where the houses on Bridge look on the three-story Solo Lofts instead of the two-story townhomes.

The first comment when I shared my initial photo on Facebook tsk-tsked at the West Central side of Bridge Avenue.

"People who give a shit on the right, people who don't, on the left," the commenter wrote. "Pride is spotty at best on the left side of the street."

This caused Thom Caraway, a Whitworth professor and former poet laureate of the City of Spokane, to jump in with a response.

"Interesting. I live on the left side of that street," Caraway wrote. "I feel like I do give a shit, so maybe don't jump to conclusions?"

Caraway had moved to Bridge with a purpose in mind. He wanted to be a part of building a community.

"We had community space," Caraway says. "We’ve got an apartment above the garage that we rent out. We felt like we wanted to be in the middle of things."

There's been a long history in West Central of this sort of intentional community building.

Several houses on this street have "peace poles" with the phrase, "May Peace Prevail on Earth" inscribed upon them.

Our cover story mostly focused on the vast differences on Bridge Avenue between the comparatively expensive Kendall Yards townhomes and condos on the south side and the West Central houses on the north side.

But there's nearly as much dramatic disparity from house to house on the West Central side, which brims with a fascinating and vibrant diversity.

Here are just a few of the photos I snapped while reporting, to give you an idea of the wide away of homes: 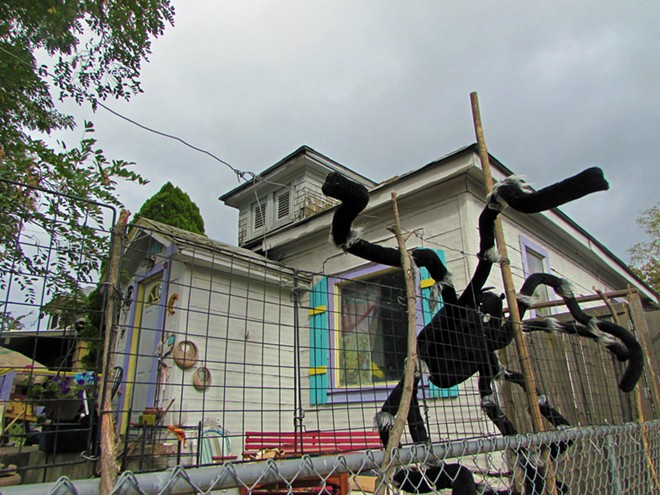 Daniel Walters photo
A sculpture of a spider climbs up the fence in front a Bridge Avenue lawn stuffed with quirky artwork. 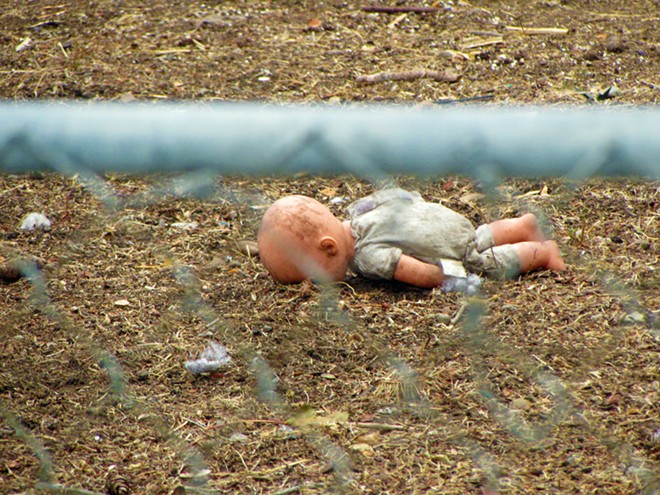 Daniel Walters photo
A doll lays facedown in the dirt, scattered among other toys on a lawn on Bridge.
click to enlarge Daniel Walters photo
A chair proclaims its love of Jesus.
click to enlarge 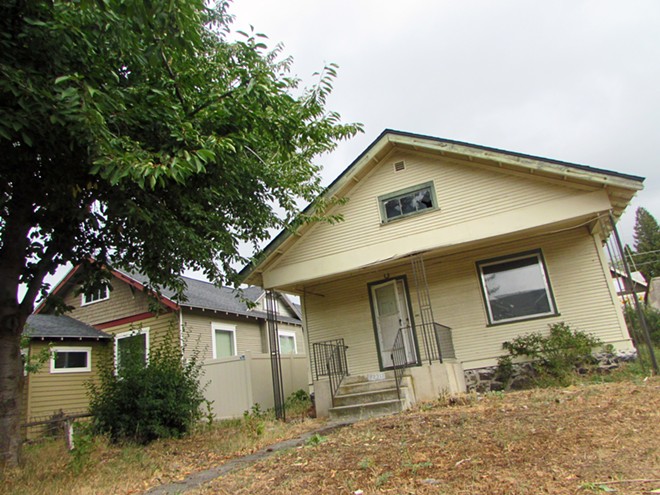 Daniel Walters photo
This house, owned by the City of Spokane CFO, has been vacant for years. He's planning on either selling it or rehabbing it next year.
click to enlarge 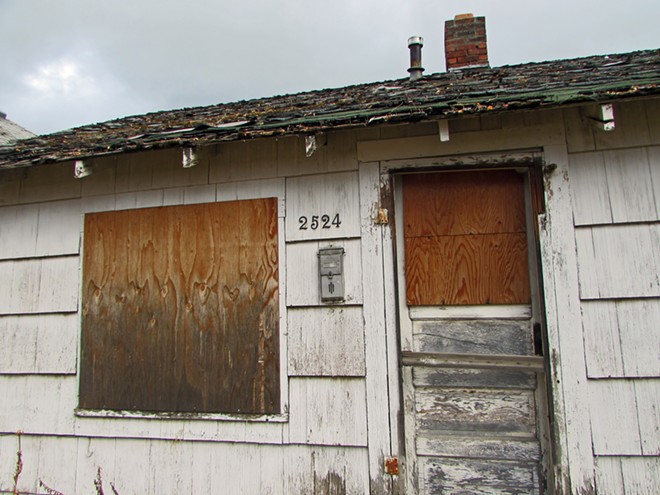 Daniel Walters photo
Abandoned homes like these sap nearby property values. Despite the presence of Kendall Yards, this house lost $19,000 in value in the past year, according to property assessments
click to enlarge Daniel Walters photo
The steps are broken on this Bridge Avenue home. It is considered in "Very Poor" condition by the County Assessor, the lowest possible classification.
click to enlarge 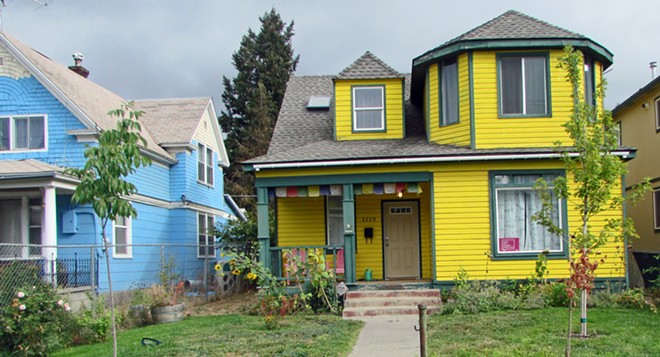 Daniel Walters photo
A Bridge Avenue home beams with bright yellow paint, a vivid contrast from the more muted colors across the street
click to enlarge 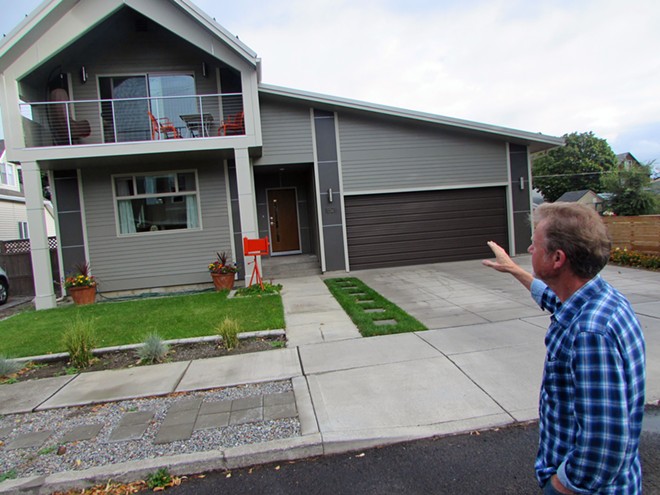 Daniel Walters photo
Photographer Nick Follger explains how he drew from Kendall Yards' design in order to blend the old and the new in his remodeled house.
click to enlarge 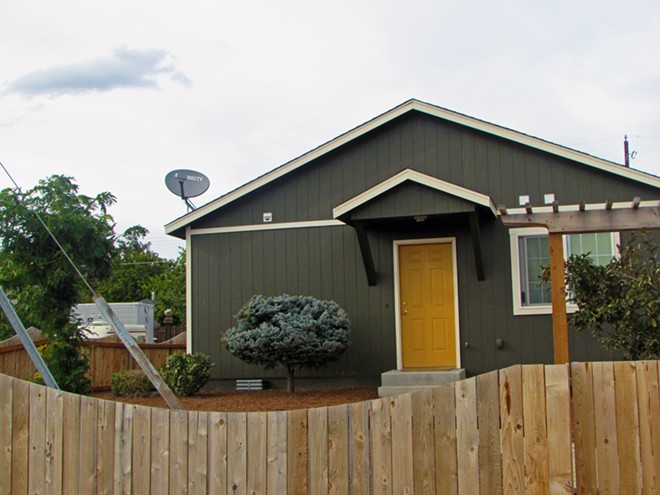 A remodeled home matches the dark grays of Kendall Yards and uses "xeriscaping" to eliminate the need to water the lawn. 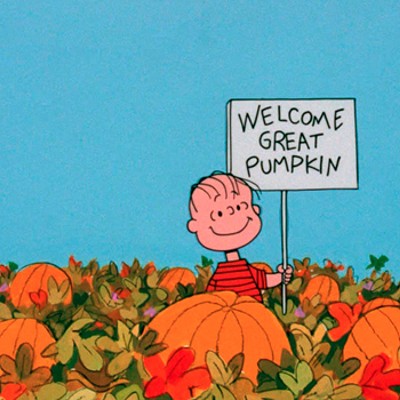