Trump vs. Ryan, Leach vs. WSU and morning news

ARTS & CULTURE: Four Spokane authors were named as finalists for the 2016 Washington State Book Awards, but it was Spokane author Sharma Shields who took home the fiction prize for The Sasquatch Hunter's Almanac. 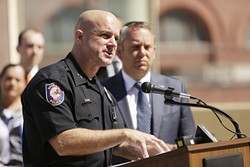 Construction delay
That downtown construction on Lincoln and Monroe streets? It won't be finished until next year. But crews will lay down a single layer of asphalt so the streets will be open in the winter. (Spokesman-Review)

Helping kids
A new soul food restaurant should open in East Central in the spring, with teens serving up the food and profits invested in children's programs. The restaurant, called Fresh Soul, is being opened by Michael Brown, who we wrote about in our East Central profile this summer. (KXLY)

Dumping Trump
House speaker Paul Ryan announced yesterday that he wouldn't campaign for Donald Trump, instead devoting himself to defending the Republican majority in Congress.