Spokane will apply for HUD project to end youth homelessness 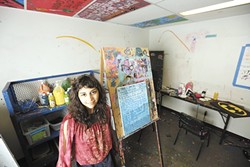 Young Kwak
Angelina, 17, became homeless earlier this year and ended up in a massive homeless encampment in Seattle
In a city the size of Spokane, ending youth homelessness may be possible given the right resources. At least that's the thinking of a collaborative work group that's been meeting to discuss how to solve youth homelessness in Spokane.

"Our hope and belief," says Dawn Kinder, Spokane's Community, Housing, & Human Services director, "is that we can be heavily impacted by three to four million dollars."

The city of Spokane will compete for a national two-year pilot to end youth homelessness, through the U.S. Department of Housing and Urban Development (HUD). The program, called the Youth Homelessness Demonstration Program, will select 10 communities to participate, four of which will be rural communities.

Communities selected will be awarded a minimum of $1 million and up to a total of $15 million.

In September, we published a cover story detailing the struggles facing homeless students in the state. There are 13,000 unaccompanied youth between the ages of 12 and 24 who experience homelessness in Washington each year, according to a state coalition aimed at addressing the problem. That number counts homelessness under the HUD definition of homelessness, which generally doesn't include kids or families staying with others or "doubling up."

Under the broader definition school districts use for homelessness, there were 2,926 homeless students in Spokane County over the course of the 2014-15 school year, Kinder says.

HUD announced the opportunity Aug. 22. Kinder says a work group to address youth homelessness — including representatives from schools, colleges, the housing authority and nonprofits — has been meeting for years. But the group has come together since a couple weeks after the opportunity was announced specifically to put together a plan and application for the Youth Homelessness Demonstration Program. The deadline to apply is in November.

If Spokane is selected, Kinder says, the goal by 2019 will be to have a holistic approach to ending youth homelessness that can be sustainable.

The money allocated to the communities designated can do a variety of things, including funding programs for rapid rehousing.

"One thing we know is true is that our housing vacancy rates in general in Spokane County are incredibly low," Kinder says.

Kinder says Spokane may be competitive for the grant because, unlike larger cities, Spokane may not have to use up too much of a portion the overall funds to have an impact. The Youth Homelessness Demonstration Program will allocate a total of $33 million to the 10 different communities selected.

Spokane City Council gave CHHS the green light to submit the application. If Spokane is selected, the council would need to take additional action to accept the money, Kinder says.

"I think this is a great opportunity for us to focus on youth and young people experiencing this crisis," Kinder says.

McMorris Rodgers, McMullin and other McHeadlines this Wednesday