Why is WSU's student conduct process now being scrutinized for suspending a football player? 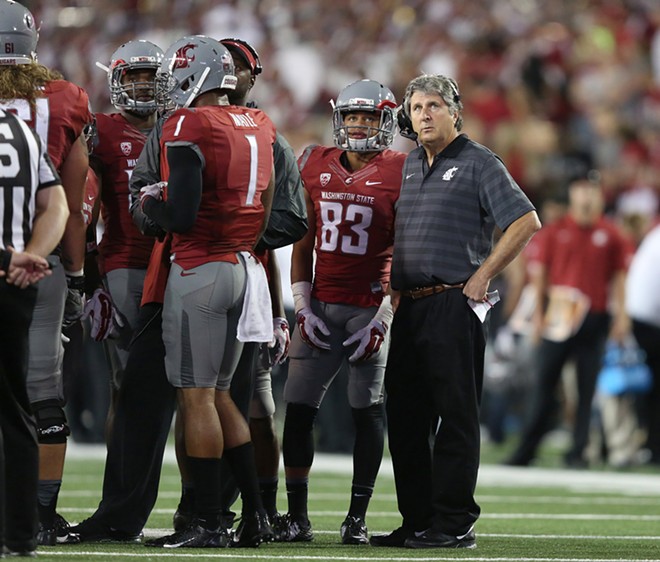 Now, the university's own disciplinary system is being scrutinized after suspending a player and potentially ending his WSU career.

Yesterday, the Seattle Times published a story examining Washington State University's student conduct process. The article centers around WSU football player Robert Barber, who was expelled for allegedly knocking a student unconscious at a party this summer. Barber appealed the decision, and it was reduced to a suspension, meaning it's likely the end of his football career at WSU unless president Kirk Schulz overrides it.

The Times article hinges on two Asian-Pacific Island advocacy groups that claim WSU's student conduct process did not grant Barber adequate due process rights. What follows is a thorough examination of WSU's process as compared to other Pac-12 schools, including the University of Washington. Samantha Harris, director of policy research at the Foundation for Individual Rights in Education, analyzed WSU's procedures and found that it affords students "more due process than we see at a lot of universities," but she also pointed out potential flaws, including not letting students have representation, cross-examination limitations, and the fact that a student can be expelled by a majority vote by the student conduct board instead of a unanimous decision.

And they aren't the only ones who have questioned WSU's conduct policy as it specifically relates to Robert Barber. State Sen. Michael Baumgartner told the Spokesman-Review in September that he didn't think WSU's student conduct board is qualified to decide if someone accused of a crime should be expelled. The Asian Pacific Islander Coalition, according to Cougfan.com, called Barber's expulsion "unjust." Since the Times story yesterday, the fan site also quoted a legal expert supporting that conclusion.

Now WSU is hiring an independent firm to review the conduct board's processes.

There are valid arguments for and against the idea that criminal matters should be be left to the court system instead of schools. Colleges use a lower standard of evidence than criminal courts — instead of having to be proven beyond a reasonable doubt, it only has to be proven that it's more likely than not that a student did whatever he/she is accused of. And if the school decides to expel a student, there's no doubt that it can have profound implications on his education, career, and potentially his reputation.

But the university conduct process is not directly throwing anyone in jail, and it's often the only thing protecting victims of assault from being confronted or intimidated by their alleged attacker on campus. The standard of proof used in student conduct cases — a "preponderance of evidence" — is the same as civil court cases. The U.S. Department of Education stipulated that colleges use this standard in its 2011 Dear Colleague letter urging institutions to better investigate and adjudicate campus sexual assault.

The Seattle Times explores this by comparing WSU's process to other schools, through the lens of advocacy groups suggesting the process is unfair to Barber. The article never mentions any evidence the conduct board might have used in its decision, like this video taken of the brawl at the summer party that shows a man identified by multiple witnesses as Barber knocking down another student, Jackson Raney, who was left concussed, according to police.

Alex Rodriguez — the victim from the brawl who had his jaw broken seconds after police said another football player, T.J. Fehoko, punched him in the head — told the Inlander shortly after the fight that he was considering transferring from WSU in his senior year if he had to share the same campus as his alleged attacker. He decided not to after he met with the WSU's student conduct office, which assured him he would protected. If the football players were not disciplined, Rodriguez was told he and his assailants would be kept apart from each other on campus. "We would always work with a student who doesn't feel safe to ensure their safety, regardless of the outcome of the process. We never want a student to be feeling unsafe on campus," Melynda Huskey, WSU's interim vice president of student affairs, has told the Inlander while speaking generally about the student conduct board. The conduct office receives thousands of cases a year. As opposed to the criminal justice system, Huskey says, the goal of the student conduct process is "educational," and intended to teach students how to make better decisions in the future.

Sen. Michael Baumgartner, however, thinks the student conduct board should be dealing with issues of academic fraud and other "scholastic-related issues," not criminal investigations.

But if that were the case, it would have implications for victims of campus sexual assault as well. Sexual assault cases often go unreported to police because victims don't want the information public, they fear the reaction of police, or because rape cases are difficult to prove beyond a reasonable doubt. Victims often go to the school, instead, to at least protect them from further trauma by confronting an alleged rapist.

When asked if the student conduct process should be involved in cases of sexual assault, Baumgartner dismisses that as a separate issue. He says a fist fight, while significant, does not rise to the level of concern of sexual assault.
"I'm not arguing there aren't some people that ought not to be in school," he says. "But we should all want the system to be fair and have safeguards and oversight. I don't think any elected official can tell you how a student conduct board works. We need to have more oversight on it." Baumgartner says the state legislature has concerns about the effect that expelling students has on society. He compared it to the push in K-12 public schools to reduce suspensions and expulsions and prevent throwing kids out on the street. Student conduct boards, he says, do not have the same due process as a court of law. "It really is a strange parallel judicial system with a lack of oversight and public accountability," Baumgartner says.

The scrutinizing of the student conduct process for its discipline of players comes after similar questions about how many players Pullman police have arrested. WSU head football coach Mike Leach made headlines when he accused police last month of targeting his players. Those accusations came after linebacker Logan Tago was arrested on suspicion of robbery and assault (he's since been charged by prosecutors) and safety Shalom Luani was arrested on suspicion of felony assault (he's since been cleared by prosecutors).
In Barber's case, it took nearly two months for Pullman police to make any arrests in the brawl that occurred July 23. Pullman police interviewed more than 60 witnesses — including 22 WSU football players — before making the decision in September to arrest Barber and defensive lineman T.J. Fehoko on charges of second-degree assault. Two other students — Dylan Rollins and Pedro Diaz — were cited for disorderly conduct for their role in provoking the fight.

Whitman County prosecutors finally received the recommended charges related to the case a month after police announced the arrests, which is significant because WSU's athletic department policy mandates that student athletes cannot represent the school if formally charged with a felony. Dan LeBeau, Whitman County chief deputy prosecutor, says a decision on whether to formally charge anyone involved with the fight won't come until December, at the earliest. He says that is not uncommon in cases like this.
Some members of the media have joined in on examining Pullman police's handling of cases. As we've noted before, reporters have supported Leach's suspicions based on apparent off-the-record interviews with people close to the football program. Just yesterday, KXLY's Melissa Luck, tweeted: "Reading report on Shalom Luani from Pullman PD. Guy w/broken nose said ... he didn't want Luani charged. PD recommended charges next day."

But that, according to prosecutor LeBeau, is common especially in assault or domestic violence cases.

"It's actually not up to the victim," he says. "If we think a person is in a dangerous situation, of course we're going to file charges."

LeBeau, however, welcomes the scrutiny of the criminal justice system.

Is there anything Spokane can do to stop stupid trucks from crashing stupidly into bridges?

THIS WEEK: Robbie Fulks, Halloween, Genghis Khan and Trevor Noah all coming around