Emails, Halloween, the World Series and other news to start your week

• THIS WEEK: Robbie Fulks, Halloween, Genghis Khan and Trevor Noah all coming around
• NEWS: Why is WSU's student conduct process now being scrutinized for suspending a football player?

A regular sight in Spokane
• NEWS: Is there anything Spokane can do to stop stupid trucks from crashing stupidly into bridges?
ELSEWHERE

Kirk went missing last weekend after leaving work in Post Falls.
Authorities have arrested two men in connection with Bo Kirk's death; however, investigators have yet to say how they connected the men and what possible motive they may have had in killing the Hayden, Idaho, man.

THE CUBS WINS!
Chicago last night beat the Indians 3-2, sending the World Series back to Cleveland for Game 6 on Tuesday night.

TIRED OF THOSE DAMN EMAILS?
It's not over yet: The FBI has reopened the case examining Hillary Clinton's emails and her use of a private server while secretary of state. That news, of course, sparked a variety of responses: outrage from the Clinton campaign, jubilation from Donald Trump and vexation from the Justice Department, which had advised the FBI to keep the renewed investigation under wraps until investigators knew if there was anything significant. If you aren't tired of the emails yet, check out the New York Times' FAQ on the matter.

Mayor Condon
The forecast calls for a cloudy, rainy day. Tonight, trick-or-treaters will face temps in the mid-40s and a slight chance of rain (about 20 percent). The Spokesman has the candy offerings of a few prominent folks on A1 today. Spokane Mayor David Condon, who apparently ate the good candy already, is planning on handing out "organic gummy bears from Costco." 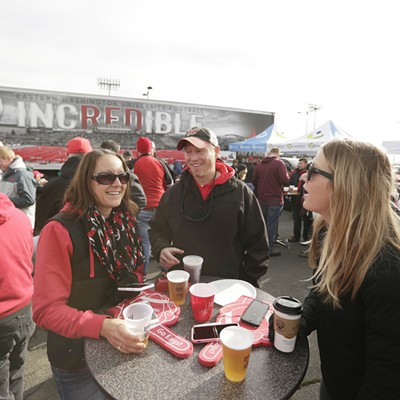 THIS WEEK: Robbie Fulks, Halloween, Genghis Khan and Trevor Noah all coming around

Just in time for Halloween, the Inlander EXPOSES dopplegangers of the Inland Northwest!