Racial slur at MLK center, local immigrants worry about Trump, and other news of the day 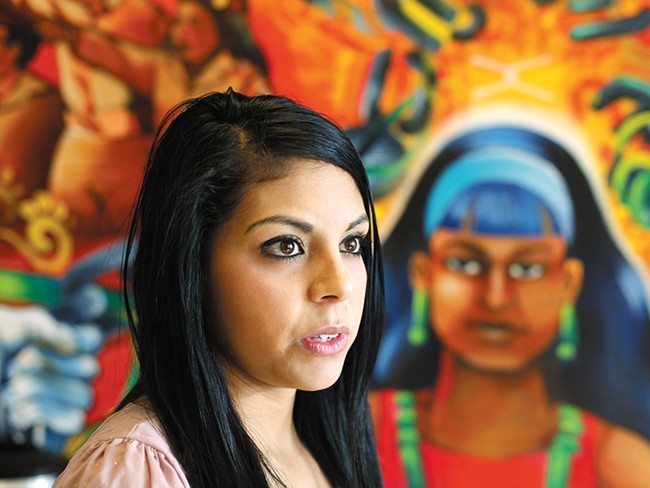 Young Kwak photo
Gabriela Alvarez, an unauthorized immigrant who came to the United States at age 11, spoke with the Inlander in 2013
On Inlander.com

Grouplove brings group-faith and group-hope
The band is coming in April.

Painting Over Hate
Yesterday, the n-word was found written on the local Martin Luther King Jr. Family Outreach Center. So far we don't know who did it, or if the culprit had any motive other than the obvious one. But the community quickly came together, not just to condemn the racial slur and apparent attempt to terrorize local minorities, but to paint over the slur, symbolizing their commitment to keep fighting for racial unity and against injustice. Shawn Vestal explores the power, and the limits, of such an act. (Spokesman-Review)

In the Shadow of The Wall
A crowd gathers at Eastern Washington University — which has about 200 unauthorized immigrant students — to worry about what happens if Trump repeals the Dream Act. (Spokesman-Review)

The Trial of Roy Murry
The trial of Roy Murry — a triple-murder suspect who was once on the slate of candidates the local GOP picked to replace Sen. Bob McCaslin — begins today. (Spokesman-Review)

That's going to be a, you know, a fascinating transition...
Trump assures us his transition is going smoothly, as everything seems to be collapsing and exploding behind him. (New York Times)

You may remember him from such presidential campaign moments as "The top 1 percent!" and "Feel the Bern!" "Bern, Bernie, Bern!" and "Bern me Bernie one more time!"
Bernie Sanders, who wasn't even a Democrat until recently, joins the Democratic party leadership. (Washington Post)

Grouplove bringing the communal good vibes to Spokane in April

A teenage drug informant, hateful graffiti in Spokane and other headlines