It’s Thursday morning. You wake up before 7 a.m. after staying in a shelter overnight, step out into the bone-chilling 24-degree weather, and have to figure out where you can take your kids for the day until the warm space reopens in the evening.


Until December, your only option might have been to go to the library, a grocery store, anywhere public enough to let you hang out for a while sheltered from the cold.


Now, says Steve Allen, executive director of Family Promise of Spokane, for the first time in Spokane’s history, homeless families have another option during the day, designed just for them. 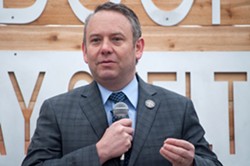 
Since opening in early December, the shelter has had about 30 to 40 people walk through the door every day, says Joe Ader, Open Doors director.


“We’re one of few shelters that doesn’t separate men and women, so families can stay together,” Ader says.


In that time, about 10 families have been able to find housing with the help they got there, he says.

One of the major benefits of having a shelter open all day is that it gives staff much more opportunity for face time with the guests, who are each assigned a supervisor to help walk them through a sustainability plan, Ader says.


A lot of people they see need help getting IDs, explaining rental history, and finding an affordable place to rent with such a low vacancy rate.


“We have people with money who can’t find someone to rent to them or find a place they can afford,” Ader says. 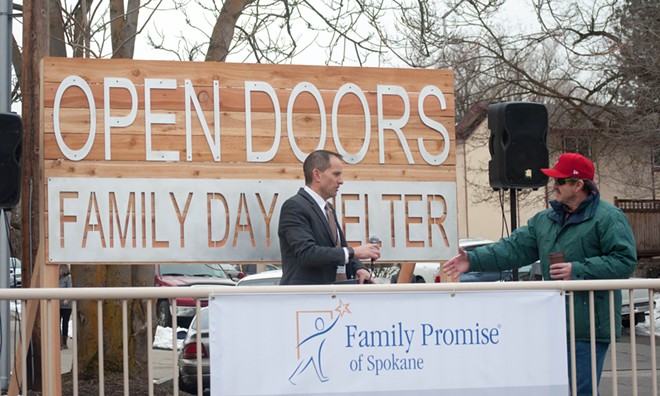 Samantha Wohlfeil
Steve Allen, executive director of Family Promise of Spokane, goes to shake a man's hand while preparing for a celebration of the recent opening of Open Doors daytime shelter for homeless families.
Celebration

Before a crowd of maybe 50 people, shivering from standing in the now 27-degree weather for a few minutes while waiting for the ribbon cutting to start around 11 a.m., Allen addresses the issues the shelter hopes to help deal with.


A large portion of those who are homeless are kids. Kids who have no choice or say in the matter.

Allen thanks the city of Spokane for helping open the shelter with a roughly $185,000 grant.

“We will only truly succeed if our community sees homelessness as our problem,” Allen tells the crowd.


As Condon speaks, he reiterates his call to make Spokane the most compassionate city in America.

He recently travelled to regional cities with City Council President Ben Stuckart to see how other areas are handling homelessness, including through wraparound services and supportive housing.

Those two things help, Condon says, but “shelters are still a critical part of how we solve homelessness.”


The crowd happily shuffles inside the warm shelter after the speeches, looking at the living room-style setup, mingling and snacking next to the the pantry, stepping out of the way as a mom moves through the crowd with her baby to the changing tables in the corner. Kids watch television with their parents, unfazed by the new faces that come and go through the open doors.