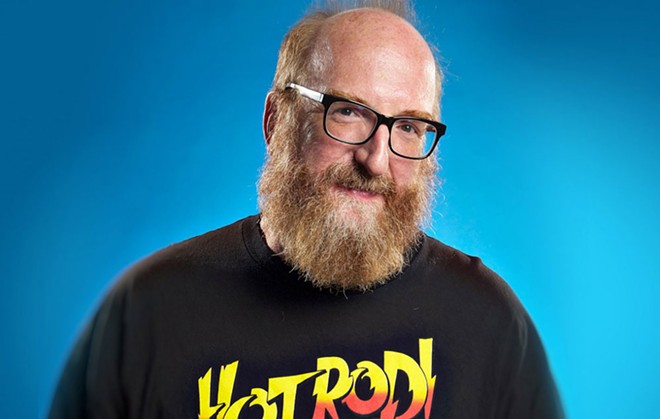 Comedian Brian Posehn headlines five shows at the Spokane Comedy Club this week.
Plenty of good ways to great March can be found in our event listings and Staff Picks, so check those out along with the dining options of our ongoing Inlander Restaurant Week and get out on the town.

FILM/WORDS | The Moran Prairie Library hosts a free screening and discussion of Unslut, a film about so-called "slut shaming" and gender bullying. Read our story about the film here.

THEATER | The touring version of Broadway hit Kinky Boots opens its Spokane run tonight. Read our story about it and get ready to get kinky.

LIVE BANDS | The Northwest of Nashville rootsy throwdown returns to The Bartlett tonight, with sets by Jenny Anne Mannan, Folkinception and The Holy Broke.

LIVE BANDS | Andy Black (aka Andy Biersack) is best known as the founder and frontman of Black Veil Brides, but on his debut solo album The Shadow Side, he jumps feet first into a world of programmed beats, ’80s-flavored synths and anthemic choruses, according to our music writer Ben Salmon. Black headlines the Knit tonight; here's a little sample of his sound:

legend just for helping bring the glorious Workaholics to life. I don't expect said toilet-bowling to occur, though, because he's a funny cat. And he's bringing his standup to The Bing tonight.

LIVE MUSIC | I'm not typically one to extoll the virtues of the ukulele, having seen far too many unskilled players in my life. But I can say that Jake Shimabukuro is easily the best uke player I've ever seen (granted, a short list), and well worth seeing in person if you can. Think of him as the Jimmy Page of the uke, or Hendrix, or Eddie Van Halen. Whatever your shredder of choice — he's it on the ukulele. He's headlining the Bing. Here's a taste:

COMEDY | Brian Posehn is one of the best standups around, a veteran of the touring circuit and favored presence on shows like Mr. Show and The Sarah Silverman Program. He's playing all weekend at the Spokane Comedy Club, starting tonight.

WORDS | PBS personality Rick Steves swings by Spokane for a European Travel Talk, where you'll hear great stories and prepare to make your own.

COMMUNITY | Join the festivities for International Women's Day in Spokane at the Women's Club of Spokane, featuring keynote speaker Favianna Rodriguez, an interdisciplinary artist, cultural organizer, and activist based out of Oakland.