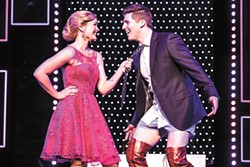 MATTHEW MURPHY
Rose Hemingway and Curt Hansen perform in the traveling production of Kinky Boots.
WHAT'S UP: We could all use a few good laughs, so here's a few ways you can tickle your funny bone and have some fun this March: catch comedian Brian Posehn at the Spokane Comedy Club, see Workaholics' Adam Devine at The Bing, and don't miss the touring version of Broadway hit Kinky Boots (read our story about it here).

FOOD: Need some help deciding which Inlander Restaurant Week eatery to check out this week? Check out some opening night reports (raviolo al uovo reviews and prime rib analysis) from Inlander team members — you have until this Saturday to get a piece of the goodness. 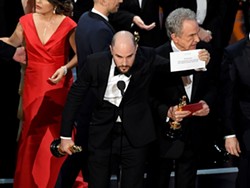 And Best Gaffe goes to...
One wrong envelope and it all goes to chaos — Moonlight took home best picture after an Oscars blunder in which the mistaken La La Land cast was still up on stage giving speeches when they found out that they were actually not the winners. Check out the play-by-play. (New York Times, CNN)

Father of fallen Navy SEAL calls out Trump admin
After declining to meet with Trump, Bill Owens is calling for an investigation into the death of his son William "Ryan" Owens during a late-January raid in Yemen, questioning why there was a mission so early into the administration. (CNN)