When a cop is accused of doing something wrong — whether it be an actual crime or a violation of internal policies — the department's internal affairs office investigates.

Those investigations have historically included the officers' names and details of their behavior, and investigative records were posted on the Spokane police website.

That is no longer the case.

In the spring of 2016, SPD scrubbed its site of the investigations and only recently replaced them with watered-down summaries of 2016 cases, modeled after the Seattle Police Department. No summaries from subsequent years, or from 2017 so far, are posted. Currently, SPD does not intend to write summaries for cases before 2016, Chief Craig Meidl says, due to lack of sufficient staff.
"Right now our level of transparency is limited by staffing," Meidl says, adding that the department has lost at least two clerical employees since former Chief Frank Straub left the department.

"We essentially wanted to move away from having names on the website," SPD Assistant Chief Justin Lundgren told city council members during the Public Safety Committee meeting last week. "We've been hearing complaints from witnesses, witness and accused officers."

Lundgren also explained that posting information on the internet ensures that it will live forever. Although not illegal, Lundgren acknowledged, publishing investigations online means the public can access the information beyond the time limit past which SPD is required to retain the records.

"Sometimes the names, under the law, aren't allowed to be redacted," he said. "So unless there's some sort of specific concern by the complainant or by the officers involved, there's very narrow legal justification that we have to redact names."

In other words, part of SPD's gripe is that they're not allowed to redact information that used to be easy to access on their website.

"It's easier, and I think as transparent, to post the summaries and if someone has a concern or request about a particular case, then they can get a copy of it," Lundgren says.

"Transparency takes away the suspicion that they're hiding something."

City Councilman Breean Beggs, who raised the issued during the meeting, disagrees.

"I was disappointed because the department was moving towards transparency," Beggs tells the Inlander. "And this seems like a big step backward. Transparency takes away the suspicion that they're hiding something."

During the meeting last week, Beggs pointed to the case involving Officer Chris McMurtrey, who was caught on body camera unleashing an expletive-laden rant on a man in handcuffs in the back of his patrol car. Meidl previously called McMurtrey's behavior "atrocious." 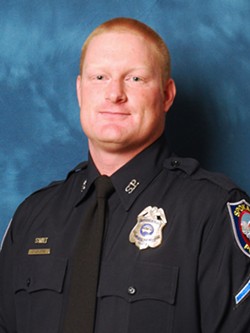 Beggs says the summary of the McMurtrey case on SPD's website is "pretty tame, like it's a small thing," when compared to the actual body camera footage. (You can judge for yourself. The video and summary of the incident are embedded at the end of this post.)

"What's important for us to publicize is the nature of the complaints so the public can see what types of cases are coming in and then the process that's used to investigate those complaints and not provide every detail of the investigation," Lundgren said.

"There's a lot of daylight between the summaries and what happened," he says. "The average person would not know enough from the summary to make a record request."

Posting the full investigation online, for example, allows the public to evaluate police investigators' work and evaluate for themselves.

This debate emphasizes the importance of a police ombudsman empowered to write detailed reports on officer misconduct and police investigations into those allegations, Beggs adds. Under current city law, the ombudsman can only "certify" an investigation as "timely, thorough and objective."