Zags face familiar foe for WCC tourney championship in St. Mary's; everything you need to know about tonight's matchup 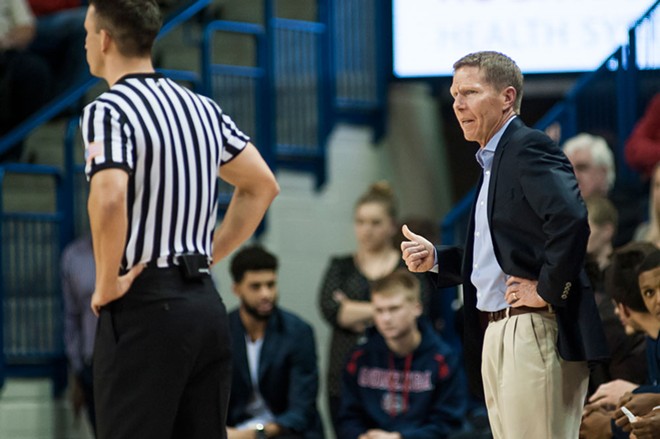 The Mark Few-led Zags are in the WCC tournament championship for the 20th straight season.
Gonzaga is in the West Coast Conference Tournament Championship Game once again. The Zags have played in this game for 20 consecutive seasons, a streak dating back to 1998.

Nigel Williams-Goss, who led the Zags in points (25), rebounds (8) and assists (5) Monday night against Santa Clara, was 3 years old. Zach Collins, who drained a three-pointer with 47 seconds left to ice the game, was not yet four months old. And current high school seniors heading to Gonzaga this fall weren’t even alive when this streak began.

“That streak is amazing,” head coach Mark Few said. “There are tons of people in Spokane who come down to this, and they literally circle the dates on the calendar back in July or whenever you guys announce it, and spend a good portion of their hard-earned money to come down here for a whole week. Our guys have done an amazing job of making their trips worthwhile.”

Those trips were made worthwhile two-fold Monday night. Gonzaga advanced to the tournament final, and Gonzaga played an entertaining game against four-seed Santa Clara.

Jared Brownridge poured in 32 points for the Broncos, who were just five points back of the Zags with under two minutes to play. But back-to-back threes from Williams-Goss and Collins, both of whom played high school basketball in Las Vegas, put the Broncos away.

These two teams, both ranked in the AP Top 25 for the entirety of the season, dominated the West Coast Conference in 2017, combining for three losses during league play. Saint Mary’s fell twice to Gonzaga, and Gonzaga fell once to BYU — the same BYU team that Saint Mary’s blew out 81-50 on Monday night to advance to the tournament final.

Saint Mary’s, which has won 28 games for the fifth time in head coach Randy Bennett’s 16 seasons, is a tough defensive team that is surgically precise on the offensive end. Point guard Emmett Naar has dished out 11 assists in each of the Gaels’ two games in Vegas. On Monday the entire BYU team totaled five assists.

Junior center Jock Landale led the Gaels with 22 points and 10 rebounds against the Cougars. Landale was limited with foul trouble in both previous meetings with Gonzaga this season, but when he stays on the court he’s hard to stop.

“I've been here for 5 years,” Karnowski said, “and every year we come here with the same mindset. We know there’s no margin for error in March.”

Gonzaga faces off with Saint Mary’s at 6 p.m. Tuesday, on ESPN, at Orleans Arena in Las Vegas.