Spokane school zone speeders pay up In a single year, red-light cameras near two Spokane elementary schools caught speeders to the tune of $1.2 million, which will go toward construction designed to slow drivers down and improve safety for pedestrians, including kids. (Spokesman-Review)

Deadly attack at hospital
At least 30 people were killed and dozens more were injured Wednesday when a suicide bomber and shooters dressed as medics attacked a hospital in Kabul, Afghanistan. Patients, staff and doctors were among those killed and injured in the attack, which President Ashraf Ghani condemned, saying it "trampled on all human values." (Reuters)

International Women's Day, Day Without a Woman
click to enlarge 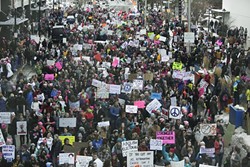 Young Kwak
The crowd at Spokane's Women's March in January. Today is International Women's Day, and some women are participating in Day Without a Woman, by striking, wearing red, and/or refusing to spend money.
March 8 is International Women's Day, and while many will participate in events around this year's theme, Be Bold For Change, others are participating in the Day Without a Woman.

Following up on the Women's March in January, creators of the Day Without a Woman want to show how integral women are to society by having women who are able to go on strike for the day, wear red, and/or not spend money online or in person except at small and women-owned businesses. School districts around the country had to call school off for the day when so many of their teachers announced they would be participating in the one-day strike. (Huffington Post)

Zags face familiar foe for WCC tourney championship in St. Mary's; everything you need to know about tonight's matchup