Yeah, that Guardian piece on Spokane and Gonzaga is totally full of it 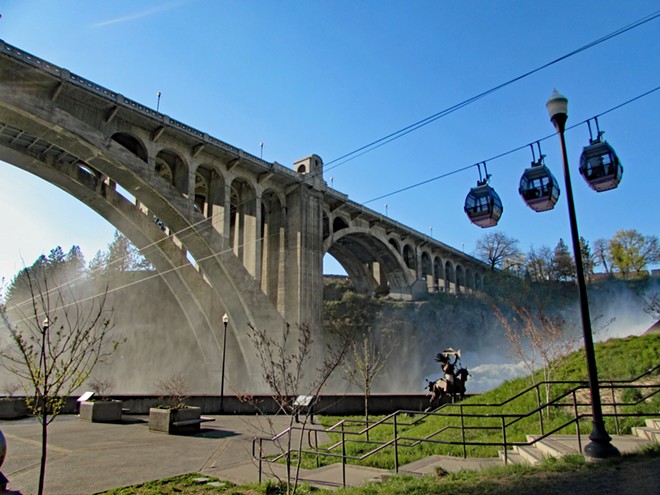 Daniel Walters photo
Despair and misery, everywhere you look!
You've probably already read the piece in the Guardian about Spokane. No, not the one about Rachel Dolezal. The one about how Gonzaga men's basketball became the one scrap of hope for the "struggling" city of Spokane.

It portrays Spokane as the equivalent of the town Dillon, Texas, in Friday Night Lights; a washed-up backwoods town racked by rural poverty and crime. Basketball is all we've got, man.

Now, to be fair, there are the seeds of a moving personal essay in here, about how the author
click to enlarge 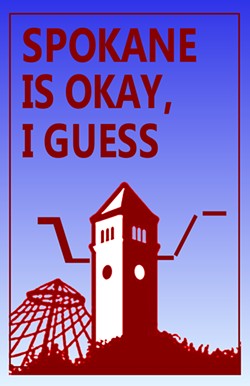 Daniel Walters photo illustration
Spokane has a lot more spirit than the Guardian gives us credit for.
— who graduated from Lewis & Clark High School in 2010 — has used talk about basketball to connect with his Zag-loving dad after his mother's death. In fact, he wrote an essay in Catapult in December that did just that, but refracting it through the sport of tennis instead of basketball.

But in the case of the Gonzaga basketball piece, his personal essay is buried under heaps of prose describing Spokane as a broken city that can only wring a few desperate drops of hope out of its college basketball team. It all reads a bit like conservative satirist David Burge's parody of liberal New York Times' reporters venture into the heart of darkness of the American Midwest.

Apparently, Spokane doesn't just see Mark Few as a darn good coach of a darn good basketball team. In this telling, we see Few as something close to a Messiah.

But that's not the big problem with it. The big problem is that the story is rife with inaccuracies, despite coming from a person who used to live in Spokane.

We'll tackle some of these discrepancies below:


But in the deeply conservative, largely rural, college-basketball-obsessed town of Spokane, Coach Few is the famous equivalent of about nine Larry Gagosians.

Let's set aside the question of whether fame is best measured in units of art dealer Larry Gagosian. Spokane is not "largely rural." Less than 14 percent of the county was considered rural in the 2010 census, and it's only grown since.

Nor is the city itself "deeply conservative." While the City Council supported a moderate conservative for mayor, the council has only one conservative member, versus six liberal members. In the past three presidential election cycles, city residents have voted for Obama and Clinton.


As the coach of the Gonzaga men’s basketball team, [Few] is the central – perhaps the only – source of hope for a struggling city.


With Spokane's high property crime rate and comparatively low median household income, it's fair to say that the city has problems. But the notion that Mark Few is our only source of hope? I've been reporting with the Inlander for nearly a decade. I've heard business groups and education leaders praise Washington State University's future medical school as promising off-the-charts economic impact. I've heard County Commissioner Al French lay out the possibility of the city becoming a major aerospace hub. I've heard state Sen. Michael Baumgartner praise the upcoming North Spokane Corridor as a source of economic revitalization.

I've heard excitement around the impact of a big new hotel, a thriving university district, major infill development, and even a pedestrian bridge. But I've never heard anyone suggest that the city's hope rests upon the coaching prowess of Mark Few.


Surrounded by open country and pine trees, Spokane sits on a tiny lump of a hill.

This is just a throwaway description line, a way to add a little bit of flavor. But it's precisely wrong. Spokane isn't sitting on a tiny lump of a hill. Quite the opposite. Bracketed by the South Hill and Five Mile Prairie, most of Spokane is in a valley, especially compared to the mountains to the northeast.


The air smells of Ponderosa bark, and the city experiences all four seasons: temperatures soar over a hundred degrees in May and drop below zero in December.

This line doesn't fare much better. It does get over 100 degrees in the summer, but the hottest May ever in Spokane was 97 degrees Fahrenheit, according to the National Weather Service. And that was in 1928.


In 1974, there was a world expo that brought a trolley system, a gondola ride, and a more expanded downtown, replete with carousel and Ferris wheel, but the carousel is now closed most of the year, the Ferris wheel now rusted.

Expo '74 brought a lot of things to Spokane, but a trolley system wasn't one of them. It hasn't had a trolley system since 1936. Ever since, the city has relied on buses instead of streetcars. And as the Inlander has reported in a previous in-depth investigation, a bus is #NotATrolley.

And the carousel? It's closed only because citizens passed a big park bond which includes brand new housing for the century-old carousel.


Last year, Spokane ranked as the 22nd most dangerous city in the United States, up from 26th the year before. Last year alone there were 10 murders, 1,100 violent crimes, and 12,000 property crimes.


Ah, this again. We already debunked this goofy statistic last year. Basically, it conflates Spokane's serious property crime rate with violent crime. It considers a single theft to be just as big of an indicator of "danger" as an actual murder.

While the county reliably votes Republican, Trump couldn't even crack 50 percent this year, thanks to a major increase in third-party votes. Because of those third-party voters, Trump actually did worse than Romney as a sheer percentage of voters in Spokane, unlike many other counties. (Clinton, however, did much worse; so Trump improved on his margin.) And while the local Republican party has come around to supporting Trump, Cruz was the clear favorite while he remained in the race among Spokane County Republicans.


Spokane’s unemployment rate is stalled at about 7%, the highest for a medium- or large-sized city in Washington and double the rate of Seattle.


Through most of 2016, Spokane and Spokane Valley's unemployment rate was consistently below 7 percent. Through the fall, the rate actually dipped below 6 percent.


For a while, that success was nowhere to be found, especially not in sports. The city has long had a minor league baseball team (the Spokane Indians) and a hockey team of the same level (the Spokane Chiefs). There was an arena football team for a few years (the Spokane Shock), but that disappeared when not enough people showed up to games. None of these teams were much to be proud of (and most of them were rather racist in name).


Besides the state and national dominance of the Greater Spokane League in high school distance running, or the massive success of Bloomsday and Hoopfest, our minor league teams haven't exactly been weak. The Spokane Indians won eight championships between 1987 and 2008. The Chiefs won the Memorial Cup in 2008. The Shock won the AFL championship in 2010.

And the Shock didn't disappear. They just changed leagues, becoming the Spokane Empire. (It seemed to be more of a problem with the AFL than the attendance at games.)

As for racist team names? The Spokane Indians names are printed in Salish on team uniforms.


When Mark Few was named head coach of the Gonzaga men’s basketball team in 1999, he put Spokane on the map.


Few was still the assistant coach in when Gonzaga made its famous "Cinderella Story" run.


In 2004, Spokane taxpayers were happy to help pour $25m into the McCarthey Athletic Center, which seats 6,000 screaming fans. But the new arena hasn’t had significant effect on the town’s struggling economy as a whole.

Spokane taxpayers didn't spend a dime on the McCarthey Athletic Center. It was raised by private donations through Gonzaga University. In fact, that's one reason McCarthey was built relatively small, according to former Gonzaga President Robert Spitzer. Gonzaga had to raise the money itself. That fact pretty much demolishes many of the subsequent paragraphs, which question whether a city gets much return on investment from a sports arena. The city might not. But the city didn't pay for it. (The Guardian has since corrected the claim.)

What about the yelling fans who paid five dollars for upper-level seats? You can't pay $5 for upper-level seats at McCarthey. Gonzaga basketball seats are mainly available only for season-ticket holders. Other than that, you can rely on scalpers, but you aren't generally going to get tickets for $5. Tickets to Gonzaga women's basketball games, however, can be obtained for around that price.

And this is another problem with the thesis of the story. Low-income Spokane residents may be able to gather around the television at the Five Mile Heights Pizza Parlor to cheer on the Zags, but watching games at the McCarthey center are generally way out of reach for the low-income fan.


Sports are like religion: they provide a built-in community to residents. In a small town that has few other forms of community, Zags fandom stands out especially.

For more information on the many other forms of community — arts, music, literature, comedy, community service projects and nonprofits, and much more — in Spokane, pick up the Inlander every week.

Trump's taxes, Spokane is the worst (or is it?), and more headlines