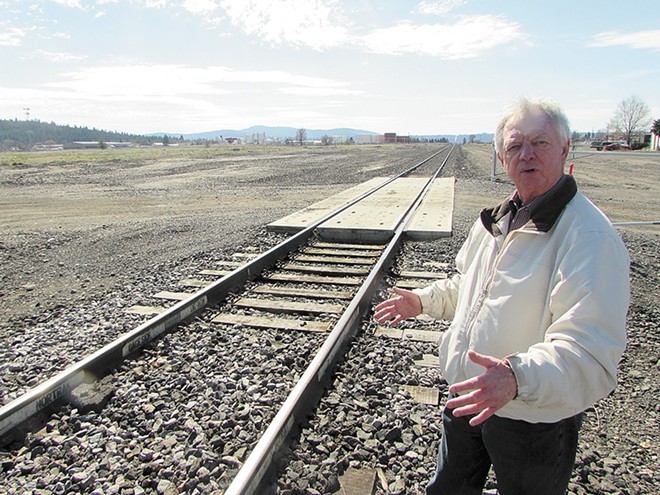 Daniel Walters photo
Richard Burris, of the Greater Hillyard Business Association, worried that an altered North Spokane Corridor route would spell doom for Market Street businesses.
The North Spokane Corridor had been in planning stages for decades, but it was finally getting built. The legislature, thanks in part to Sen. Michael Baumgartner breaking with his local Republican colleagues, had provided full funding for the freeway. Businesses in Hillyard hoped it could be an artery pumping new blood into the Hillyard area, bringing about a full-scale economic transformation.

Then all those plans ran into a big, black splotch. A 7-acre plume of leftover oil, 170 feet below ground. Aquifer contamination leftover from an old railway refueling station. Right in the way of the proposed freeway route.

The Washington State Department of Transportation's initial solution would have shifted the route to the west, right behind the renovated Market Street business district, and sent the freeway soaring up on two bridges.

The Hillyard neighborhood, envisioning being trapped under the shadow of freeway traffic, was pretty freaked out about what it could mean for the work they'd done improving the business district.

"In one paragraph they could change it, and everything is for naught," Richard Burris, of the Greater Hillyard Business Association, told the Inlander last summer. "[And then] that entire area is a blight, and it always will be."

On March 1, representatives from the Burlington Northern Sante Fe railway, the Washington state Department of Ecology, and DOT met for an all-day negotiation session in a DOT office in Spokane. And by the time they were done, they'd hammered out a new framework: Yes, the original route will shift slightly to the west, but it won't be very close to Market Street. And it won't be elevated.

That may seem like a simple solution. But when you're talking about getting two state bureaucracies and two massive industrial conglomerates to come to an agreement, it's a lot trickier than that.

“BNSF and Husky are pleased to have reached this framework with WSDOT and Ecology. It allows us to work together in a cooperative manner that is a win-win for the community and all parties involved,” says Allen Stegman, BNSF Railway's General Director of Environmental, in a statement. “We are focused on moving forward with the remediation of the Black Tank site in partnership with our stakeholders and look forward to continued collaboration.”

To some degree, the state of Washington knew this could be an issue for a while. In 1999, Burlington Northern Sante Fe railway informed the Department of Ecology there was surface pollution on the "Black Tank" site. By 2008, BNSF informed Ecology that the aquifer had been contaminated, too.

By 2012, Ecology had worked out an order for the potentially liable companies for the pollution, BNSF and Husky Energy (which bought up Marathon Oil), to assess the damage.

Then, in 2015 and 2016, things began happening very fast. First, the North Spokane Corridor got fully funded — surprising many observers. The funding, however, came with a tight timeline. And second, the full scope of the contamination began to be known.

"We never know what we’re going to find in the ground until we go looking," says Jeremy Schmidt, Washington state Department of Ecology site manager for the cleanup effort.

The ultimate agreement sticks very closely to the original route laid out by the legislature back in 1997, and, crucially, grants WSDOT the right of way to put the freeway through BNSF property.

As for the pollution? That's where things get scientifically fascinating. The first plan, says Schmidt, is to "" the ground. Basically, cleanup crews would pump air down into the contaminated sludge. You see, normally bacteria in the air eats up oil, causing it to degrade nationally. But underground, the bacteria don't have the oxygen necessary to gobble away. This would fix that problem.

And if, after five years, the hasn't worked? There's a backup plan.

Extracting the sludge is not as simple as drinking a milkshake through a straw. "This product is very viscous, it’s thick like honey," Schmidt says. But as anyone who's thrown the honey bear into the microwave for a few seconds knows, there's a way to fix viscosity. Cleanup crews could inject steam down into the oil, heat up the sludge, and then pump it out.

The Department of Transportation has already set aside $15 million in case the initial plan doesn't work. But for now, construction on the freeway can really get started. Instead of needing to simultaneously design for multiple potential routes, WSDOT knows the new plan.

"We were going in two different directions," WSDOT spokesman Al Gilson says. "Now we can turn the bridge engineers loose and get some bridge design going."

And Baumgartner is happy, to say the least. He savaged former director of Washington state Department of Transportation director Lynn and gloated about her firing. But he says he's been impressed with the new head, Roger Millar.

Now, Baumgartner says, the key is to make sure that Hillyard is poised to take full advantage of the impact.