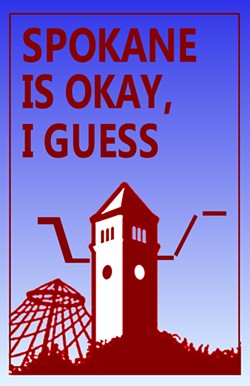 Daniel Walters/Chris Bovey photo illustration
We here at the Inlander are not immune to civic boosterism
Spokane is not the hippest city, as you know.

But that's because this ranking, like most rankings, is junk journalism.

And the Hipster Index is a classic example. It's a crude measure of how many thrift stores, vegan restaurants, tattoo parlors and microbreweries are in a community, as well as how steep recent rent increases have been.

These are bad measures. Tattoo parlors can speak just as much to a biker culture as a hipster culture. Microbreweries speak more to the fact that a community is in the Pacific Northwest than the idea that it's the tip of a hipster spear.  A huge chunk of the people who shop at Spokane thrift stores aren't doing it to be ironic or twee. They're doing it because they're trying to save money. Take a walk through Spokane's Value Village and count how many hipster bros you see.

Spokane is famous for not being at the cutting edge. We get everything, from restaurant trends to cupcake shops to indie movies to economic recessions, far later than most major cities.

Check out how lazy the Business Insider writeup is:


Spokane is home to Gonzaga University and Washington State University Spokane, so there are tons of young people in this vibrant city, as well as plenty of hip businesses catering to them.


Yet our civic leaders have constantly struggled to find ways to keep young millennials in the community. Listen to last year's testimonies from some of the people who you might consider the closest Spokane has to "hipsters," about how many cool young people have already left Spokane, and why.

Talk to the folks who run concert venues or arts groups about just how easy it is to attract funding — or even an audience — in Spokane.

(By contrast, this ranking, calling us the 44th most attractive city for Millennials, feels about right.)

One Luke Baumgarten does not a hipster city make.

The hipster ranking list, however, is just the tip of the listberg.

Spokane is hardly the 22nd most dangerous city in America, despite the Safewise ranking of cities claiming we were last year. That's because the rankings just clumsily added the cities' property crime rates to their violent crime rates, effectively treating shoplifting as "dangerous" as murder.

And in a city that does have a sky-high property crime problem, that sends us soaring up the supposed rankings.

Even the property crime rankings are messy and full of caveats. Tourists commit many of the crimes in Idaho resort towns,  but because the towns have low numbers of year-round residents, their per-capita crime rates can look artificially high.

We can't even accurately compare Spokane's property crime rates last year to this year's, because the city changed the way it tallies crimes. It doesn't mean the information is worthless — we wrote a whole cover story on why Washington state's property crime was so high — but there's a reason even the FBI cautions people from using their crime data to compare one city to another.

It's highly unlikely that Spokane is the third fittest city, as FitBit claimed last year. We're not the World's Fattest Town, but our physical activity rate, our obesity rate, and our smoking rates are all worse than the Washington state average.

That's because FitBit uses information gleaned from FitBit devices to get a better average. If you have a city where, say, just the people training for Bloomsday buy FitBits, and the average unhealthy Spokane Joe doesn't, the data quickly gets skewed.

Spokane is not the city with the third ugliest people, despite Travel and Leisure making that claim.

First of all, how dare they say that about my sister.

Second, the information comes from an open survey of about 50,000 Travel and Leisure readers, many who've presumably never gazed upon the beauty of a Spokane face. (As to whether readers surveys are reliable gauges of expertise,  well...)

Maybe the entire population of Atlanta forgot to moisturize for a year.

Or maybe these lists are garbage.

No, Spokane was not exactly the third-gayest city in the country, despite The Advocate claiming we were in 2013.

The Advocate's algorithm was a disastrous mishmash. Yes, you'd get a point for LGBT elected officials and for anti-discrimination laws, but also points for concerts by Glee cast members, Pottery Barn stores, Whole Food grocers, and roller derby leagues.

The original writeup, tellingly, named Dempsey's Brass Rail as a major reason why Spokane was the gayest city, despite the bar having closed more than a year earlier.

The corrected writeup leaves Spokane as the gayest city because of our supposedly growing diversity, passionate LGBT population, and the mere existence of a Pride March and a Rainbow Festival.

These rankings are clickbait dressed up as half-serious data wonkery. Most of them come with thinly veiled profit motives.

I suspect, at times, they're intentionally bad, a way to drive controversy, discussion and, most importantly, clicks. An appreciative click weighs the same as a hate click, after all.

Journalists write about the lists for the same reason.

Yet when cities latch onto good results on these lists or lash out at bad ones, it just feeds this terrible trend.

Your city is cool if your daily paper doesn't do a story every time your city appears on a list of Top 10 Cool Cities Because _______. In fact, I've made a list of Top 10 Cities With Newspapers Apathetic About BS Marketing Lists and yours is No. 4.


So is there a way to do these lists right?

Perhaps. Here's how Outside magazine did its 2013 Best Towns list.


To find the best place to live well, we started with the American College of Sports Medicine’s annual list of the country’s 50 healthiest cities, then added a few small and midsize active towns that the metro-centric pool overlooked. We called local runners, cyclists, climbers, and surfers to help narrow the finalists to ten places where it’s easy to eat healthy, find work, and quickly access great trails, beaches, and mountains. Then we put them up for a three-week vote on Facebook.

Outside magazine wasn't a slave to algorithms, reader suggestions or surveys. It combined them all, and added it some editorial discretion, to draw some decent, rational picks.

Spokane made the cut.

Best of all, it also starts with this backhanded compliment that works just as well as a jab at certain other city ranking lists: "Mochaccino-sipping Seattleites may call it Spokompton for its perceived crime, but the city is about as dangerous as Bend and safer than Colorado Springs."

CAT FRIDAY: Gifts for cats and their people