Cost for repairs estimated at $9 million 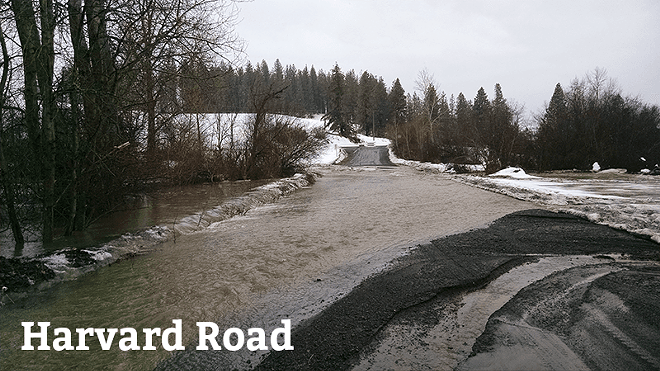 Courtesy of Spokane County
This was a road, once
As dozens of Spokane County roads are flooded due to rapid snow melt, the long-term damage will cause at least $9 million in needed repairs, says Public Works Spokeswoman Martha Lou Wheatley-Billeter.

And that number is likely to keep rising, she says. Just a month ago, the county estimated it would cost $1 million to repair flood-damaged roads.

"It's going to require a lot of money," Wheatley-Billeter says.

Hopefully, she says, not all of that money will come from the county budget. The county will apply for reimbursement from the Federal Emergency Management Agency, and whatever FEMA gives the county will help with road maintenance this year.

But Wheatley-Billeter says Spokane County is already $2 million over the maintenance budget for the entire year — and it's only March.

Right now, there are two dozen roads closed due to washouts in Spokane County, and that doesn't include roads closed in incorporated areas (click here for a map of road closures in the county). A few of those roads have been under water for more than a month. The longer they are, the more costly it gets.

"There's nothing we can do about this," Wheatley-Billeter says. "The ground is so heavily saturated that we're losing parts of road. They're eroding away."

The county declared a state of emergency last week that gives the county Public Works Department some extra supplies and equipment. County crews are out trying to mitigate damage, she says, but they have little time to do other things like fix potholes.

What has been particularly damaging to roads is when water pools and trickles into cracks and then freezes, says National Weather Service meteorologist Rocco Pelatti. That has happened a lot this month, he says.

As for the flooding, Pelatti says most of the smaller rivers in the area should crest today, but water levels in Lake Coeur d'Alene and the Spokane River are still rising.

Wheatley-Billeter says she is concerned about the budget for maintenance later this year, and she says the Public Works Department might ask Spokane county commissioners for more money down the road, depending on how much federal relief Spokane County gets.

"This is going to be an ongoing issue," she says.

CONCERT ANNOUNCEMENT: Spoon set to return to the Knitting Factory in August