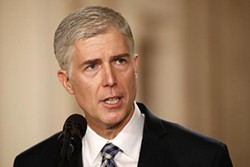 InHealth: Laughing gas for labor pain? It's a thing.

What's Up: Meat Puppets, STRFKR and Lilac City Fairy Tales are among the many worthy things going on in the Inland Northwest this week.

Huddle up, or maybe not
A high school football coach from Ferris High School is under investigation for allegations he exposed himself to some players last summer. (KXLY)

Rising waters
Officials throughout the Inland Northwest are warning drivers to watch for flooding, including in Kootenai County. (KREM)

Well, duh
FBI Director James Comey told Congress this morning that there is no evidence of any wiretapping at Trump Tower, as the president has contended while offering no proof.