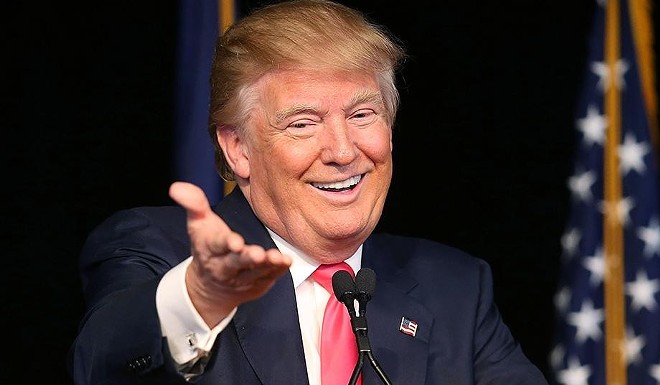 That was the question facing Spokane Judge James Triplet last month in deciding the seriousness of an assault on a 15-year-old girl. In unraveling this question, Triplet invoked President Donald Trump's boasting about grabbing women's genitals.

"Our president openly brags that he can grab women by the pussy — his words — whenever he wants to, because that's what people who are powerful and rich get to do," Triplet said from the bench after finding a 17-year-old boy guilty of an assault that involved grabbing a female classmate's crotch three times.

But citing a lack of evidence — as well as other pop-culture references such as hip-hop artists grabbing their crotches during aSaturday Night Live performance and Justin Timberlake exposing Janet Jackson's breast during a Super Bowl halftime show — Triplet absolved the teenage boy of any sexual motivation attached to the crime.

"The bottom line is that there are so many things in our society and culture that are done that cross the line regarding appropriate behavior," Triplet said. "Yet our society allows that risqué and sexually explicit behavior to be modeled to our children, who are developing physically, emotionally, and with respect to their maturity. They often watch these public figures to determine what's hip, what's okay, or what's acceptable."

The case raises questions about boundaries between young, adolescent boys and girls, and the extent to which popular culture is responsible for blurring the lines of appropriate behavior.


"Our society allows that risqué and sexually explicit behavior to be modeled to our children, who are developing physically, emotionally, and with respect to their maturity."

According to Washington state law, an assault involving a person's genitals does not automatically mean that the assault was sexually motivated. Prosecutors must prove that the accused was sexually gratified in some way.

Triplet was not persuaded by prosecutors' arguments that "it must be sexual because we can't think of another reason." The judge said he was struck by how "nonchalant" the teens looked on a security video that captured the assault. Because the teenage did not touch himself, did not have an erection and testified that he was "being goofy and dancing and making jokes to get her to laugh," there was no evidence of a sexual motivation, Triplet said. Instead, the judge concluded, it's reasonable to believe that the teenager unknowingly overstepped serious boundaries.

The 17-year-old boy was sentenced to six months of community custody and 25 hours of community service. Had the judge found evidence of sexual motivation, the boy would not have been required to register as a sex offender, and his sentence length would not have increased, defense attorneys said.

The entire incident was caught on a security camera last June at North Central High School. Here's what happened, according to Triplet's retelling in open court:

The teenage boy and the victim, who were 16 and 15 years old, respectively, at the time, were hanging out in a hallway after school on a Friday, according to their testimony. The boy and the victim were not dating, though they knew each other.

Initially, the boy was dancing in front of the girl while they both waited for rides. Later, he playfully tapped the side of her head, and the girl did the same. Then he poked her stomach and hips and grabbed her crotch and butt several times.

The girl "gives no reaction," Triplet summarized. "She's talking to him, and he's rolling his hands around each other in another dance-type move."

The following Monday, the school's dean of students, Mary Gustafson, confronted the victim, who she described as "shy, standoffish and embarrassed." The victim acknowledged that she was laughing and joking with the boy, but she felt violated when he touched her.

"[The victim] said that while she never said it was offensive until Ms. Gustafson talked to her, she still felt violated because the touching was unwanted," Triplet said in court. "She again said she didn't tell anybody because she didn't know what to say, and she didn't know how to approach people with that information."

When Gustafson confronted the boy, his initial reaction was "Oh, shit." The boy admitted to touching the victim's genitals and butt more than once. But he told Gustafson that he "thought [the victim] was into that, based on previous conversations they had. He also felt she was into him."

He cried and admitted, "I messed up," according to a school resource officer's report. The boy was suspended for the rest of the year, and messaged the victim on Facebook later that day:

"Hey, so I just wanted to apologize for Friday. I hope you know I wasn't trying to make you uncomfortable, and I hope it didn't. I was just trying to get a laugh out of you, but I really am sincerely sorry. And they told me you and your family could, like, charge me, and I'm honestly scared because I really don't want to get in that much trouble. I got suspended for the rest of the year, and again, I'm really sorry."

In explaining his decision, Triplet said there is no doubt that the touching was offensive and "just because [the victim] did not tell [the boy] no, did not react adversely, did not cry out for help, or did not go running away from the scene does not mitigate the offensiveness of this act."
However, he continued, that it's possible the victim did not recognize the touching as abusive until adults confronted her.

"The fact that she didn't speak out, tell him no, ask someone for help, or report it to anyone suggests that she didn't think it was that big of a deal until she was confronted by the school," Triplet said.

Sherry Jones, a member of the Spokane Area chapter of the National Organization for Women, echoed Triplet's comments about the example set for kids in pop culture.

"Sexual assault and harassment have become normalized in our culture," she said. "The president is supposed to lead by example, and he's given us the worst example through his own actions and his legislation."

Jones said public schools should teach students about consent and how to enforce one's own physical boundaries and respect those of others.

During the court proceeding last month, when Judge Triplet dismissed sexual motivation as a factor, he lectured the teenage boy after the victim left the courtroom.

"Do you understand that this was not acceptable?" the judge asked.

"Okay. Again, making a finding of a sexual offense would follow you around for life. So if you're ever back in court in front of this — with this type of a matter again, I'm not certain you're going to avoid responsibility, but just make sure you always treat people with respect and ..."

"And honor their personal space. You're also lucky you didn't get slugged."