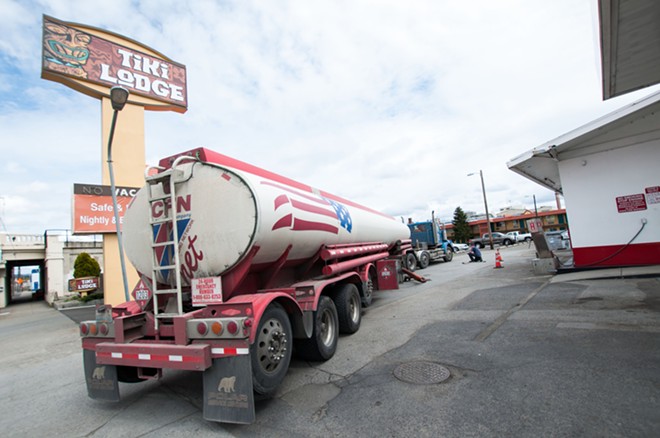 Daniel Walters photo
A gas truck adds fuel to a downtown Spokane gas station near the Tiki Lodge.
ON INLANDER.COM

The need to fix the need for a drug fix
Washington state will get $11 million to fight opiate addiction, and other health-based headlines.

Scoutmaster of the Universe
A Spokane Scoutmaster won $250,000 on a reality show last night. (Spokesman-Review)

Mission accomplished
And with the Davenport thoroughly saved, the Friends of the Davenport disbanded, because they had no more worlds to conquer. (Spokesman-Review)

The Bluff pushes back
One of the landowners who had a road bulldozed through his land on the South Hill bluff is suing the contractor who drove the bulldozer. (KREM)

From Ja Rule to mob rule
Fyre Festival, a luxury music festival in the Bahamas, has lurched into chaos and anarchy. (Pitchfork)

Walled off
It's possible that Trump won't be able to build his wall at all. (Vox)

The Republican health care bill gets the death-panel treatment
The latest, gritty reboot of the Republicans' Obamacare replacement has been canceled again — or at least put on hiatus.

Look out, Congress! Here come the moms (and babies); plus, addiction assistance and teaching therapy

"Unicorn" food: a soon-to-disappear fad or something more?