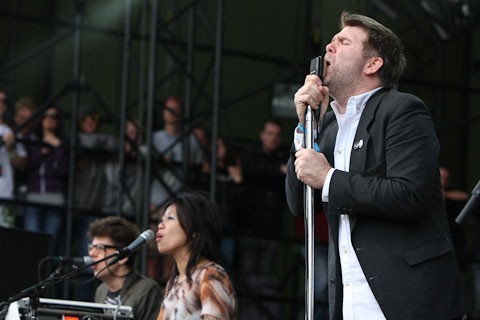 LCD Soundsystem performing at Sasquatch! in 2010.
Here's a nice last-minute festival shakeup: LCD Soundsystem has been added to the Day 1 lineup at the upcoming Sasquatch! Music Festival. The high-energy electronic collective fronted by producer and songwriter James Murphy previously played the fest behind Pavement and Massive Attack in 2010; they've now been upgraded to headliner status.

The bad news about all this: The band is replacing Frank Ocean, the opening day's previous headliner. The acclaimed R&B crooner cited "production delays" as his reason for canceling his Sasquatch! set, and his exclusion from the lineup will no doubt disappoint some ticket buyers.

But the silver lining is that we're getting an LCD Soundsystem performance out of Ocean's cancellation. The band recently reformed after a brief hiatus, and they dropped two new singles ("Call the Police" and "American Dream") yesterday. And if you don't know what all the fuss is about, check them out when they perform on "Saturday Night Live" tomorrow.

A counterargument to McMorris Rodgers' defense of Thursday's Trumpcare vote