NEWS: Two Spokane police officers sustained minor injuries and seven staff members were assaulted in a brawl at Excelsior Youth Center that resulted in the arrest of five kids on on a combined total of 18 charges, including criminal mischief, fourth-degree assault and third-degree assault on law enforcement. The Inlander recently wrote about problems at Excelsior. 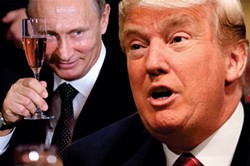 Putin and Trump: With friends like these...
Thanks, Vlad... but no thanks
President Trump has received an offer of help from a not-necessarily-welcome source: Russian President Vladimir Putin. That won't help his stature among a growing number of members of his own party, who are starting to back away from Trump as allegations mount involving everything Russian but Boris and Natasha. (Boston Globe)

Risch: Leakers are 'traitors'
Amid multiple reports that Trump  had shared classified information with high-ranking Russian officials during a meeting in the Oval Office, Idaho Sen. Jim Risch says it's not the president's fault. He blames 'weasels' and 'traitors' — presumably in the White House — who leaked the story initially to the Washington Post.

WSU's Barber acquitted
Former Washington State University defensive lineman Robert Barber was acquitted of second-degree assault charges in a Pullman courtroom. Barber,  who was accused of assaulting another WSU student in a brawl at a backyard party last July, plans to resume his pursuit of a professional football career. (Spokesman-Review)

Gang of three?
All but two of the world's 197 countries are part of the 2015 Paris climate agreement, a United Nations accord aimed at fighting climate change. But the United States could soon join Syria and Nicaragua as the third. Meanwhile, the White House is reportedly at war with itself regarding climate change. (Washington Post)

A brawl broke out at Excelsior Youth Center Monday night, and five kids were arrested