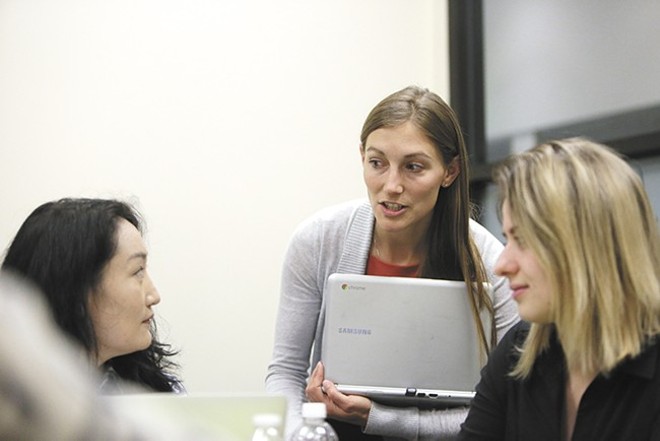 "The drop in student numbers over the last 12 months, especially the last 6 months, has made it impossible to maintain the college as a viable operation," says a note on the college's website from Jim Clark, SCEL president.

Two years ago, enrollment was over 150 students. By the last day of class on Friday, May 26, only six students remained at the school, says Joshua Porter, SCEL director.

Porter says several factors contributed to the dip in enrollment, but perhaps most notably is a decline in scholarships from the Saudi Arabian Cultural Mission, which many students relied on to attend SCEL. This is a trend not only in Spokane, but across the nation. Colleges that had high numbers of Saudi Arabian students have been seeing those numbers drop, as the Saudi government has tightened its requirements for its foreign scholarship program.

"The Saudi Arabian Cultural Mission was a big player in the international student game," Porter says.

The college, which was located in downtown Spokane, used online curricula that hundreds of other institutions across the world use as well. Some of it was developed right here in Spokane, Porter says. But Porter says the other institutions using the curricula are not shutting down. The Inlander wrote more in-depth about SCEL in this story last year.

The students in Spokane won't be left without a place to learn, Porter says. Students who were green-card holders have been given options of other English as a Second Language programs in the area, including the program at Spokane Community College and at Gonzaga University. Other international students, who had a visa contingent upon being enrolled in a program, have already been enrolled in other programs with the help of SCEL. At least one student, however, elected to go back home to Saudi Arabia, Porter says.

"We're doing our best to guide them to smoothly transition to other academic programs in the area," Porter says.

Spokane College of English closes, U of I researcher looks to predict sea level rise, and morning headlines