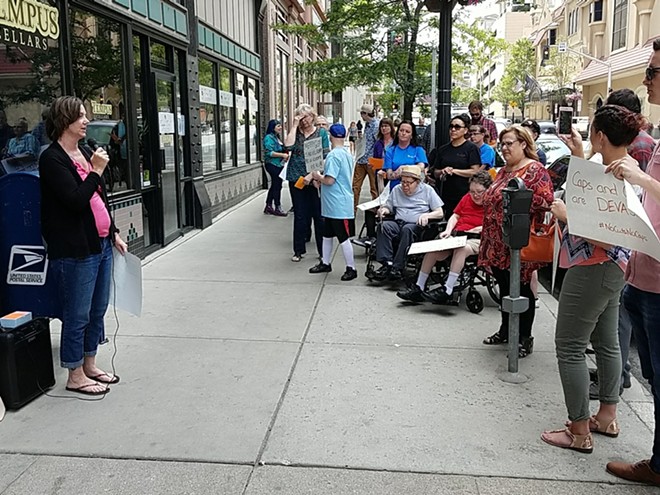 Forrest Holt photo
Protesters in downtown Spokane gather in front of elected officials' offices in opposition to AHCA proposals.
Darci Ladwig is a concerned mother who turned to activism to advocate for her 14-year-old daughter, who has disabilities stemming from a premature birth.

She fears that if Medicaid support is cut, her daughter could have to move to a state institution, separating her from her community.

Ladwig spoke at a rally Tuesday put on by The Arc of Spokane, an advocacy group for people with disabilities. She and other organizers were there to protest changes to Medicaid as proposed in the American Health Care Act (AHCA). It was one of nine demonstrations across the country.

"Medicaid makes it possible for people to have jobs and living situations. These people are our neighbors, friends and family members," Ladwig says. "AHCA could have devastating effects."

The crowd of about 30 gathered in front of the downtown offices of Democratic Senator Patty Murray and Republican Congresswoman Cathy McMorris Rodgers.

People with disabilities and their family members addressed the group, sharing their experiences and distributing contact information for state legislators and members of Congress, urging their peers to make their voices heard.

One mother held two gallon-sized plastic bags full of medicines that her child has to take every day. Another man spoke of his struggles with bipolar disorder and accessing the right kind of care.

Specifically, the protesters rallied against provisions in the AHCA that would limit the amount of money the federal government could give to states as compensation for what they spend on health care services.

n a Washington Post op-ed last month, McMorris Rodgers, who represents Eastern Washington in the House of Representatives, wrote in support of the AHCA, which she voted for when it passed the House in early May. She claimed the current health care law — the Affordable Care Act, commonly known as Obamacare — made health care more expensive and less accessible for people like her son, who was born with Down syndrome.

Ladwig, who is also a coordinator for the Spokane County Parent Coalition, argued that the AHCA would be worse for people with disabilities. She said the AHCA’s stricter Medicaid spending limits would hinder in-home health services.

“This is so much more than health care,” Ladwig says. “[Medicaid] allows people to lead lives in their community, and that’s important.”


“We have worked hard in society to get to this point,” Arc Executive Director Sima Thorpe said. “We don’t want to walk that back.”

Doug Overlock is the executive director of Merry Glen, a nonprofit family cooperative in Spokane that serves people with disabilities. He said the residents decided they wanted to be a part of the rally after learning about it on Facebook.

The demonstration was important to Merry Glen, Overlock says, because housing and residential care is an important service, funded in part by the Medicaid program.

“We’re in that whole Gordian knot of Medicaid services,” says Overlock, who added that Merry Glen has already struggled to adequately compensate its employees.

“They can’t cut us anymore,” Overlock says. “We compete with Domino’s delivery drivers to attract workers that perform very important medical and physical services for people.”

But what’s more important than funding and wages, he says, is that vulnerable people deserve care.

Sima Thorpe, executive director of The Arc of Spokane, says she was happy with the rally’s attendance and plans to meet with Senator Maria Cantwell’s staff on Wednesday.

Thorpe says that cuts to Medicaid would reset decades of progress, and people with disabilities would not be able to live their fullest lives without it.

“We have worked hard in society to get to this point,” she says. “We don’t want to walk that back.”