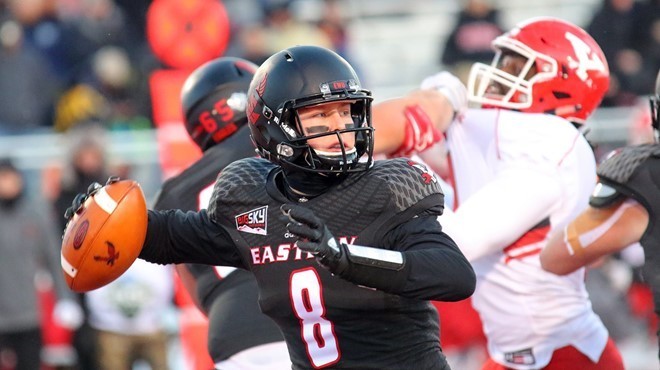 EWU Athletics
Eastern Washington junior quarterback Gage Gubrud will need to have another huge year to help the Eagles compete with North Dakota for the Big Sky title.
Despite the loss of Cooper Kupp, now a Los Angeles Rams receiver, and Pac 12-bound former coach Beau Baldwin (now offensive coordinator at Cal), both the Big Sky media and coaches expect Eastern Washington to be a powerhouse again this year in the conference.

On Tuesday at the Big Sky Conference Football Kickoff in Utah, the Eagles were picked to finish second by both writers and the conference coaches, with North Dakota chosen to win the conference in both polls.

Last year, the Eagles and North Dakota's Fighting Hawks tied for the Big Sky championship, with both teams going 8-0 and never facing off on the field. This year, the teams play Nov. 11 at North Dakota in what could be a game for conference supremacy.

The only surprise in the polls might be how little the media or conference coaches expect the loss of the Eagles' best player and longtime head coach to affect the team's success. New head coach Aaron Best has five new coaches on the offensive side of the ball, while the Eagles' defensive staff returns intact.

While the offensive coaches are new, Eastern returns plenty of experience on the field, including 26 letter-winners on defense and 23 on offense — most notably star quarterback Gage Gubrud, who was a surprise finalist for the Walter Payton Award, handed out to the Football Championship Subdivision's most valuable player.

The junior QB was picked as preseason Offensive Player of the Year at the Big Sky meeting, while defenders Albert Havili and Mitch Fettig also earned preseason all-league nods.

The Eagles open their season on Sept. 2 with a game at Texas Tech; they'll try to take down a Division I foe for the second straight year after beating Washington State in 2016.