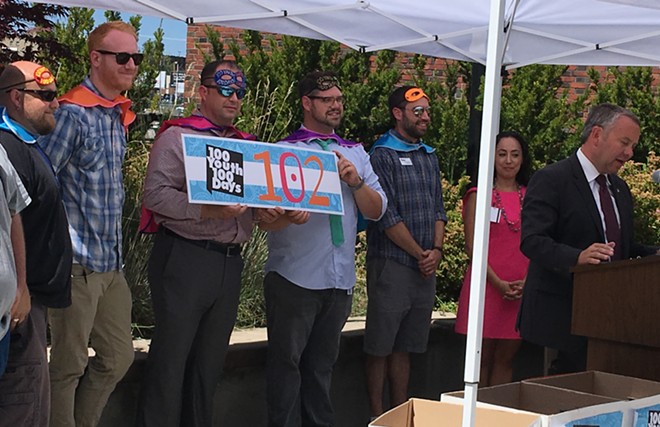 Spokane Mayor David Condon, right, congratulates city staff, outside agencies, and businesses that worked to house more than 100 youth in 100 days.
After they were no longer welcome to live with family, Brandi Murphy and Antoine Thomas headed east from Seattle because life is cheaper here.

The two lived out of a 2001 Toyota Solara for about four months this spring, parking mostly in the lots of big-box stores like Kmart and Walmart, where people were less likely to bother them. 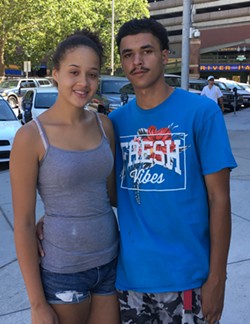 Brandi Murphy, 20, and Antoine Thomas, 19, were among youths who found housing during the challenge.
"If you try to park at parks, people would say they have our license plate and they're calling the cops or whatever," Murphy says. They always moved along rather than wait to hear from law enforcement.

Living in the car was terrible, Thomas says, and scary, Murphy adds.

"You feel judged," she says, "'cause people think, like, just because you're homeless you're not a normal human being."

But about a month ago, the young couple found out they'd be able to sign a lease for a house, after getting help from the city, SNAP (Spokane Neighborhood Action Partners) and other agencies working together to house at least 100 homeless youths in 100 days.

"It was a big relief," Murphy says.

It's not perfect, but it's a huge step in the right direction — while the couple has assistance paying for rent and utilities until they can find jobs (Thomas has already found one), they still have to navigate the transition into life on their own, including paying bills and maintaining the house.

"The everyday responsibilities of having a home, like cleaning, the bills you need to catch up on, they all settle in and kind of amplify and make you freak out a little bit," Murphy says.

That said, "It's definitely better than sleeping in our car, so I won’t complain," she adds.

Over 100 days, the city was able to find housing for 102 youths, with another two lined up for housing within a week, and 13 more with vouchers who just need to find a place to rent.

Part of the aim of the city's 100 Youth, 100 Day Youth Housing Challenge was to address shortfalls in the existing service systems, looking for areas where young people need more help. Other places in Washington state, including Pierce and King counties, also took on similar challenges.

"Most 18- to 24-year-olds have a safety net that helps them when they fail and learn," says Matt Davis, a homeless program specialist with the city of Spokane and team lead for a group that met regularly to make sure the 100 Day effort moved forward. "What we're trying to do is have the Spokane community wrap around these youth like their families normally would."

The team tackled some of the things that keep people from being able to use their vouchers, such as paying for a deposit and application fees that aren't always covered by vouchers, and convincing landlords to take a chance on the young renters, Davis says.

To help cover those move in costs and pay for larger damage deposits that incentivized landlords to rent to the youths, the city received help from a combined $50,000 in grants from the Raikes Foundation and Shultz Family Foundation, he says. And many local businesses donated to the effort. Volunteers compile move-in kits on Monday afternoon, July 31.
At a table near the compiling station, people used markers and colorful pencils to make Welcome Home cards to go in each basket. 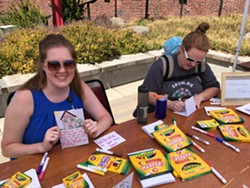 Jessica Fisher, left, and Sarah Miller make Welcome Home cards for move-in kits for youths who have been placed in housing.
Though the 100 days are over, the improvements made will continue to be used, says Tija Danzig, Homeless Services Program manager for the city.

"I don't want this to be a 100-day effort," Danzig says. "We had no additional funding, so it was a way to learn what resources we do have already."

Service providers are moving away from the idea that you're homeless for a reason, and that reason needs to be addressed first before you get put into housing, Davis says. Instead, they're housing people first, and giving them stability to then be able to address any underlying issues.

Previously, youths were assessed and rated for their level of need like others in the community and lumped together with a pool of adults also waiting for services, Danzig says. But during the challenge, youths were assessed against other youths, with the hope of getting more youths into housing and preventing longer-term homelessness.

There's always a need for more landlords, Davis says, and people can help with younger people by volunteering to become a host home for kids who are temporarily not allowed to stay with their parents, or by becoming foster parents.

"We can't build our way out of homelessness, it takes private landlords," Davis says.
And the city plans to keep building on those systems.

"Our goal was to house 100 youth," Mayor David Condon said in a speech Monday to those who participated in the 100 Day Challenge. "But we did not look at it from the perspective of just reaching a number. We looked at it as a stepping stone to a higher goal of providing a system where our youth would feel safe and supported when they need help.” 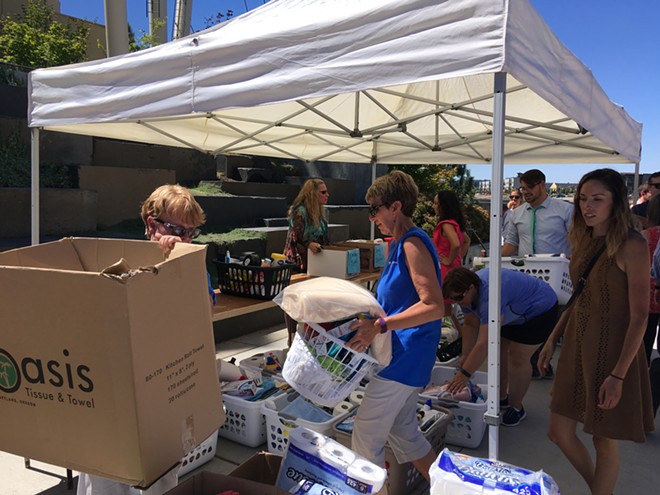