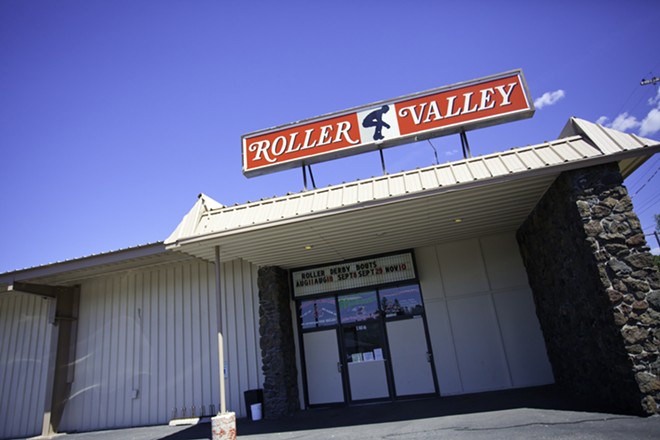 They took our pogo sticks, and we did nothing. They came for those hoops you rolled with a stick, and we stayed silent. Then our drive-in theaters started to disappear.

Roller Valley, in operation for the past 42 years, is closing up shop today, following the death of its owner, Colleen Bernstein. Today from 1 to 3 pm, and tonight from 8 to 10 pm, is the public's last chance to lace up skates and hit the rink.

Amy Hunter
An Inlander photographer wandered into Roller Valley in 2011 and found Morgan, a skating enthusiast and mother of one. Morgan told the photographer that "treadmills suck," and that she made a point to get to the rink at least once a week to exercise.
"Thank you to everyone in the Spokane community all so much for the support over the years," Roller Valley said in a Facebook announcement.

Incredibly, roller skating dates back to the 18th century, when a guy named John Merlin was the first person known to have invented a roller skate, in the 1760s in London, according to the National Museum of Roller Skating. Skating gained traction in the early part of the 20th century: Charlie Chaplin starred in the film The Rink in 1916, and the pastime took off during the Roaring Twenties, before the Great Depression ground everything to a halt.

Then came waitresses on wheels in the '50s and '60s, serving up burgers and fries at drive-ins. Even the Amish loved skating, the New York Times reported. ''It's faster than a horse, and it's fun," Andrew Herschberger told the Times in 1996.

Finally, roller skating peaked in the days of disco — captured in the 1979 film Roller Boogie — before beginning its slow, eventual decline.

One Tree to open cider house on Sept. 8