REVIEW: Love it or hate it, the Twin Peaks reboot was fascinating, uncompromising TV 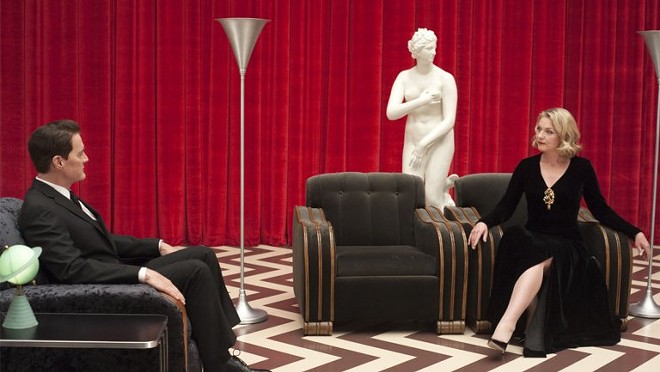 That single line of dialogue, delivered near the end of Twin Peaks' long-awaited third season, turns out to be perhaps the most cathartic in the entire series. It was uttered when the show's iconic hero, the perpetually chipper FBI agent Dale Cooper, awoke from a stupor that had relegated him to a shuffling, toddler-like mental state, but it also signaled the moment when the show's new characters and plot lines definitively and seamlessly converged with the old ones. The past and the present had crashed into one another, though it didn't take long for that union to come undone.

David Lynch and Mark Frost's beloved cult property returned to television this spring (you might recall our May cover story about it) in a fog of hype, and it became clear from its deliriously strange and formally audacious two-hour premiere — complete with an intimidating glass box, a face-eating poltergeist and a headless corpse — that its authors had no interest in warm, cozy nostalgia. They had blown up their creation, and they were in no hurry to put the pieces back together.

That's what made this new strain of the show so frustrating in its early stages, and ultimately so exhilarating as it wrapped itself up. This season of Twin Peaks required a considerable amount of patience — I've talked to several friends who abandoned it after just a few episodes, and the ratings weren't great — but it ultimately paid off in alluring fashion.

Because make no mistake: This fresh batch of episodes was even more befuddling and unpredictable, more unapologetically Lynchian, than the original iteration of Twin Peaks ever was. Having shaken the constraints of prime-time network TV, Lynch and Frost here doubled down on surrealism and abstraction — the experimental, black-and-white "Part 8," the weirdest of the new episodes, was essentially a direct descendant of Lynch's great debut feature, the 1977 cult classic Eraserhead — and the result was certainly the most defiantly bizarre season of television ever aired.

We've seen a lot of long-dead shows return to the small screen in recent years, and so many of them (regardless of quality) have been content to simply trot out the familiar characters and catchphrases we all liked the first time around. It's an easy way to get a knowing laugh from the audience, and while Lynch does this, too, he really makes his callbacks count.

None of the explicit nods to the original series — Laura Palmer's appearance in the Black Lodge, James singing "Just You," Ed Hurley's unrequited love for Norma the diner owner, Audrey dancing at the Roadhouse, all that coffee and pie, the myriad allusions to the 1992 prequel film Fire Walk with Me — were there to simply wink at us; they all served emotional purposes, and they mostly felt earned. 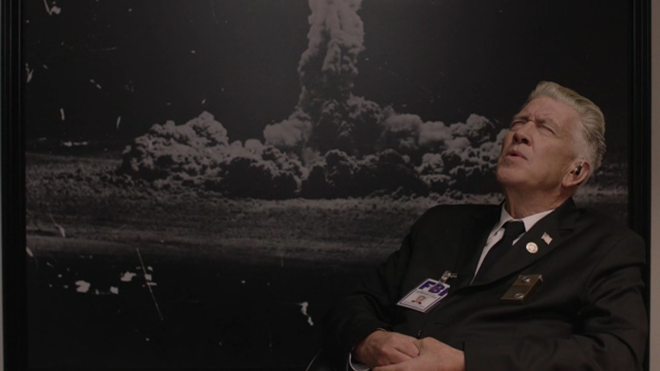 Creator David Lynch (as Detective Gordon Cole) and his vision of the apocalypse.
While the return of Twin Peaks tied up a few of the loose ends left dangling when the show was yanked off the air in 1991, Lynch has never been one for tidy closure. If this season had wrapped up in a totally coherent fashion, it would have been remarkably out of character. The finale, which ran on Sunday night, left us with a whole new set of questions that will likely never be answered, and that's probably how it should be.

The way I see it, Twin Peaks: The Return is a meditation on the notion of purgatory: Like Cooper forever chasing Laura Palmer's salvation, and like the infinity symbol that emerges from the steam of that Phillip Jeffries apparatus, the show finally circles in on itself in a way that's as structurally bold as it is dramatically compelling (or irritating, depending on how you look at it). When Cooper — or whatever approximation of Cooper we're left with — asks Laura/Carrie what year it is, we realize that the very act of rebooting Twin Peaks has unmoored its characters in time.

Not everything worked, of course. The Dougie Jones business proved redundant. The final confrontation with the demon BOB (in a floating orb that pinballed around the sheriff's office) was unbearably goofy. Some of the subplots were real eye-rollers, particularly the Cockney fellow with the super strength, and the corruption within Dougie's insurance firm. Pretty much anything involving Andy and Lucy (and their son, the comic miscalculation that is Wally Brando) crashed and burned.

The season also indulged in some of the Lynchian staples I've never particularly cared for — the vast gulfs of silence between lines of dialogue, the deliberately herky-jerky special effects, the wanton cruelty directed at nubile women and the leering nature with which he photographs it.

James Hurley: Cool, or no?
It was, however, a stunning success on a purely technical level. Cinematographer Peter Deming, who also photographed Lynch's Lost Highway and Mulholland Dr., worked wonders in a number of visual modes — from the flat haze of the Las Vegas suburbs to the noirish glow of the Bang Bang Bar at night. I missed hearing composer Angelo Badalamenti's most iconic musical cues, but his weird ambient drones nicely complemented Lynch's own strange sound design, all ominous humming and howling wind and crackling electricity. Lynch also assembled a terrific supporting cast, with the likes of Naomi Watts, Robert Forster, Laura Dern, Matthew Lillard, Amanda Seyfried, Tom Sizemore, Jennifer Jason Leigh, Tim Roth and even Jim Belushi fitting seamlessly into the Twin Peaks universe.

And then there's Kyle MacLachlan, who did the best work of his career playing (simultaneously) clear-eyed hero, black-eyed villain and dead-behind-the-eyes comic buffoon. I initially balked at Cooper's absence from the bulk of the show, but the fact that his unflagging optimism was noticeably missing only intensified the suffocating darkness of Lynch and Frost's vision. Twin Peaks has always been a show about trauma, particularly that which is perpetrated against women by vain and violent men (Leland Palmer, Leo Johnson, Jacques Renault, Richard Horne), and how evil must always coexist with good.

I'm still not sure if I understand how (or if) it all fits together, or how exactly all the new characters figure into the overall narrative; another watch through might clear up a few things (though certainly not everything). But like any Lynch work, to watch it is to sink into it, and finishing it all has felt like waking from a particularly vivid dream: Parts of it make sense, parts of it don't, and yet you spend the whole rest of your week thinking about it, wondering what it all means.

It was worth the wait.