WSU Athletics
WSU linebacker Peyton Pelluer, center, celebrates with teammates after returning an interception 36 yards for a fourth-quarter touchdown that cut Boise State's lead to 31-23 with 5:51 on the clock. The Cougs won 47-44 in three OTs.
It's Week 2 of the Monday Morning Placekicker, the Inlander's weekly catch-up session on the doings of the Northwest's football teams, allowing total sports geeks to relive (hopefully) some glory from the weekend past, and uninterested and casual-at-best observers to get a Cliff's Notes version to help keep up with sports talk around the dinner table at home or watercooler at work. We'll typically be here every Monday.


COUGARS RALLY FROM 21 DOWN IN THE 4TH, PREVAIL IN 3RD OT

If this turns out to be a special season for Washington State, Coug fans can point to Saturday night's wild events at Martin Stadium as a turning point.

Trailing 31-10 in the fourth quarter and without ineffective and injured starting quarterback Luke Falk (who earlier in the game became WSU's all-time leading passer), the Cougs staged a furious comeback behind backup QB Tyler Hilinski, with the help of two huge Boise State turnovers, forcing overtime on Hilinski's 6-yard TD pass to running back Jamal Morrow with 1:44 left.

After three overtimes and more than four hours of play, with midnight approaching, Hilinski — a redshirt sophomore who completed 25 of 33 passes for 240 yards in relief of Falk — tossed his third TD pass, a 22-yard connection with Morrow, who dove into the end zone for the game-winning points, capping an improbable 47-44 victory. Up next for the 2-0 Cougs? The Pac-12 opener against Oregon State at Martin Stadium, next Saturday at 2:30 pm.


Earlier in the day and a few miles to the east in Moscow, nothing went right for Idaho in a 44-16 shellacking against UNLV at the Kibbie Dome as a Rebels team that had lost in Vegas to Howard, a 45-point underdog, the previous Saturday took their frustration out on the Vandals. Matt Linehan threw for 261 yards and a score for Idaho, which saw its six-game win streak come to a definitive end. It doesn't get any easier for the 1-1 Vandals, who travel to Kalamazoo, Michigan, to face Western Michigan next Saturday at 4 pm. The Broncos are 0-2, but those losses — neither one a blowout — were at USC and Michigan State. 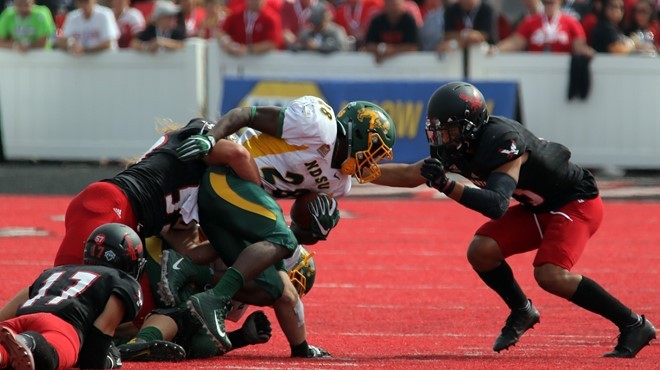 EWU Athletics
Ty Brooks and North Dakota State ran all over the Eagles, roiling up 375 rushing yards in the Bison's 40-13 victory.

The Aaron Best era in Cheney is not off to an auspicious beginning: The Eagles laid an egg for the second straight week, getting trucked 40-13 by North Dakota State in Eastern Washington's second-most-lopsided home defeat in the past four decades. Quarterback Gage Gubrud completed just 10 of 30 passes for 134 yards and an interception, though he did run for the Eagles' lone touchdown. Eastern will seek its first victory next Saturday, a long way from home: The Eagles travel to New York City to play Fordham, another Football Championship Subdivision team that plays in the Patriot League.

Meanwhile, things are humming right along in North Spokane, as Whitworth (2-0) blew out Whittier at the Pine Bowl, pummeling the Poets 49-10. Ian Kolste threw for three TDs and ran for another as Whitworth debuted its new brand-new, million-dollar FieldTurf surface at its home stadium. The Pirates, who have outscored the opposition 105-23 so far, play La Verne next Saturday at 11 am at the Pine Bowl.

The Seahawks managed just three Blair Walsh field goals in a season-opening 17-9 loss at Green Bay on Sunday as the offense was ineffective and occasionally inept, totaling just 225 yards, converting on only 3 of 12 third-down attempts, and turning the ball over inside its own 10-yard-line, resulting in one of the Packers' two touchdowns.

Seattle's offensive line did Russell Wilson no favors, as the Seahawks QB was sacked three times, managed to escape from four more sacks, and was hit seven more times by Packers rushers. The game marked the return of Hawks' five-time Pro Bowl free safety Earl Thomas and wide receiver/return man Tyler Lockett, whose 2016 seasons were ended by serious leg injuries. The Seahawks return to Seattle to host the 49ers next Sunday; kickoff is 1:25 pm.

Elsewhere in the NFC West, former Eastern star Cooper Kupp had four catches — including an 18-yard touchdown — for 76 yards in his NFL debut as the Los Angeles Rams crushed the Indianapolis Colts 46-9, giving 31-year-old Sean McVay the victory in his first game as the youngest head coach in NFL history.

Kyle Shanahan's NFL coaching debut didn't turn out as well, as the San Francisco 49ers fell 23-3 at home to Cam Newton and the Carolina Panthers, and the Arizona Cardinals, expected to be the Seahawks' top divisional competition, sure didn't look like it in a costly 35-23 loss at Detroit as Matthew Stafford, who recently signed a five-year. $135 million contract, the most lucrative in NFL history, threw four TD passes for the Lions.

Cardinals QB Carson Palmer tossed three interceptions and Arizona's best running back, David Johnson, carried 11 times for just 23 yards before leaving the game with a dislocated left wrist; he will undergo surgery and could be out for as long as three months.

WSU at Washington: Cougars control their own destiny in 110th Apple Cup