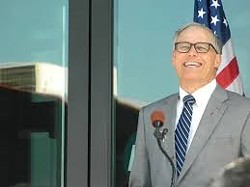 If you were Jay Inslee, you'd be smiling too.

Oh, just let Jay do it
Spokane County's board of commissioners has been down one commissioner for two months. Al French and Josh Kerns attempted to choose from three fellow Republicans to fill the seat, but they couldn't do it. .So two-term Democratic Gov. Jay Inslee gets to instead. Blame (or thank) the Washington State Constitution.

Putting a cost on combating cancer
How much does it cost to develop a drug to fight cancer and bring it to market? Less than previously believed, says a new study from the the Journal of the American Medical Association: Internal Medicine. (via New York Times)
• What can a pharmaceutical company do to protect its drug patents? Allergan is selling its patents for Restasis to a Native American tribe. (via New York Times)

Big investments in Spokane
More than half a billion dollars has been dedicated to five major Spokane-area construction projects: The Inlander's new Annual Manual has the details on the what, the where and the when. And, of course, the cost.

Suspects identified in Cheney pot shop abduction
Police have identified two of the three suspects in Sunday's kidnapping of a marijuana dispensary employee at Lucid in Cheney. Both are from the White Swan area of Yakima County, where police believe they currently reside. Cameron Smith, 46, of Cheney, remains missing but is believed to be in the Yakima area. (Spokesman-Review)

Hawaii cannabis dispensaries to go cashless
Hawaii, one of eight states to legalize marijuana for recreational consumption, announced that it will be the first to go cashless — all eight of its licensed dispensaries have agreed to ask their customers to use a debit payment app by Oct. 1. (Washington Post)

Cleveland rocks!
Are you a Cleveland Indians fan? Well, probably not. But if you are, there's a good chance you're smiling right now. Your team won its 20th consecutive game last night, tying an American League record set in 2002 by the Moneyball Oakland A's. (NPR)
• The Indians' remarkable streak, by the numbers. (Cleveland.com)