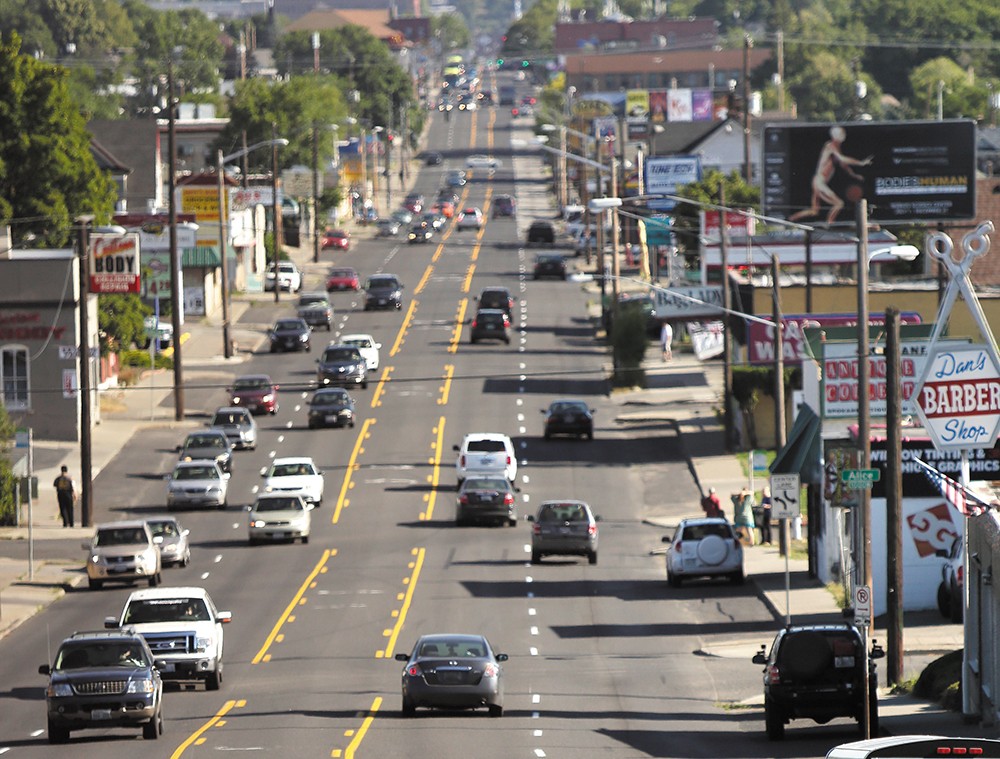 LOCATION: The 1.12-mile stretch between Kiernan and Indiana avenues

The stretch of North Monroe Street below Garland, between Kiernan and Indiana avenues, has plenty of horror stories to tell. There have been car accidents. There have been vehicle doors that have been ripped off because of the lack of room between the road and the parking on the side of the road. And there have been deaths; 5-year-old Elayna Burrows-Gust was killed in 2013 when she tried to cross five lanes of traffic with her mom and brother.

That safety issue was exactly why the city received $4.6 million in grants to make that 1.12-mile stretch of Monroe safer. The overhaul will bring new streetlights, transit shelters, benches, trees along the street, and lighted crosswalks. Sidewalks will be widened. The pavement will be rebuilt. And — here's the rub — the number of lanes will be reduced from five to three. That has terrified many of the business owners along the stretch, who worry that the construction and "road diet" will leave them starving for customers. But the surrounding neighborhood, along with some of the younger businesses, are more supportive, even enthusiastic.

Expect this project to a play a key part in the 2017 election — even though the city council never voted on it explicitly. Councilmembers like Candace Mumm, however, say the final results of the overhaul will be positive — the key now is to make sure the city bolsters the businesses to help them weather the storm. 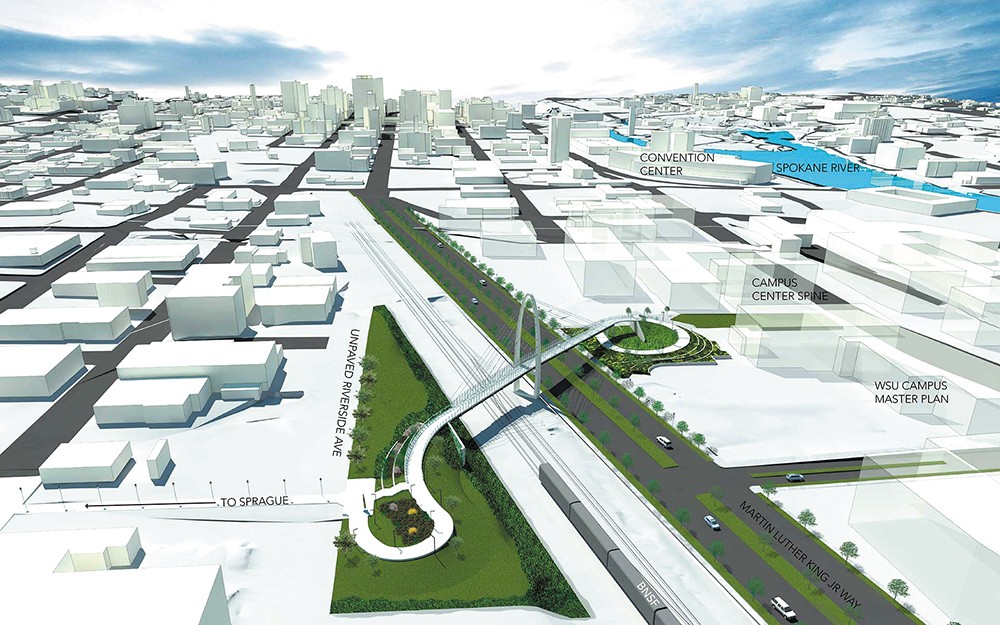 Rendering of Avista's Catalyst project on the south side of the pedestrian bridge.

LOCATION: The University District, east of downtown Spokane and the surrounding region

COST: A total of $13.3 million in public funding

This year, the goal has been to try to spread that success to the surrounding area, starting with construction on the $9 million University District Gateway Bridge. It will not only give cyclists and pedestrians a way to cross the railroad tracks that divide Sprague Avenue from the University District, advocates hope the bridge will stand as another landmark for the region.

At the same time, $4.3 million will go to rejuvenating the stretch of East Sprague between Helena and Stone streets, bringing in new streetlights, sidewalks and landscaping. East Sprague is receiving a lane reduction as well, but in this case, the business community has largely welcomed the change.

The influx of public investment has already been answered by a wave of private investment. In March, Avista announced the Catalyst project on the south side of the pedestrian bridge — a 140,000-square-foot project spread across five acres. Think high-tech labs. Offices. Classrooms. Exactly the sort of project the University District and pedestrian bridge was supposed to attract.

LOCATION: Just north of the Spokane River and west of the Monroe Street Bridge

The blank spaces in Kendall Yards, the 78-acre former railroad yard and Superfund site owned by Greenstone, are beginning to be filled in. In February 2017, the Summit Medical building opened, with three stories of medical clinics, including one from Providence. The end of June brought the opening of My Fresh Basket, giving West Central and Kendall Yards a welcome, albeit pricey, food option. Even the Inlander got in on the action. The crew behind Chaps Diner and Bakery turned the former Inlander lobby into the Paper and Cup coffee shop.

Greenstone will be putting in a small business district near Olmsted Brothers Green park. The spot between Nectar Wine & Beer and Spa Paradiso will get a new restaurant and retail space, complete with a community fitness center for Kendall Yards residents.

The wide-open space between the Inlander building and the Monroe Street Bridge, currently occupied by a dusty lot filled with boulders and marmots, will be the future site of 200,000 square feet of residential, retail and office space. 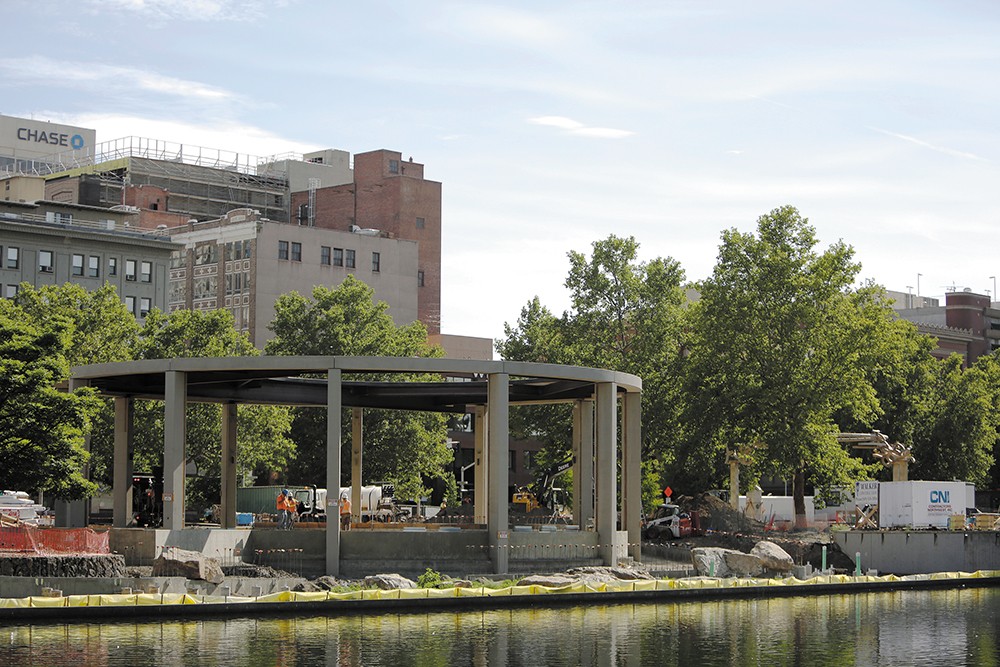 LOCATION: Directly north of downtown, and across the street from City Hall

Even as the debate over the design — and budgeting — of the iconic U.S. Pavilion stretched out through the summer, the 2014 Riverfront Park bond project has begun to yield real fruit. The bones of the new $7 million Looff Carrousel building have risen up. The Howard Street bridge replacement is under construction. The space for the new Ice Ribbon — an upgrade on the old ice rink — has been cleared away.

Meanwhile, there have been challenges for the park— the Rotary Fountain looks to cost nearly $1 million to repair, and that sort of funding was not a part of the park bond. And there are big decisions still to be made about the design on the north bank of the park, including a new regional playground. 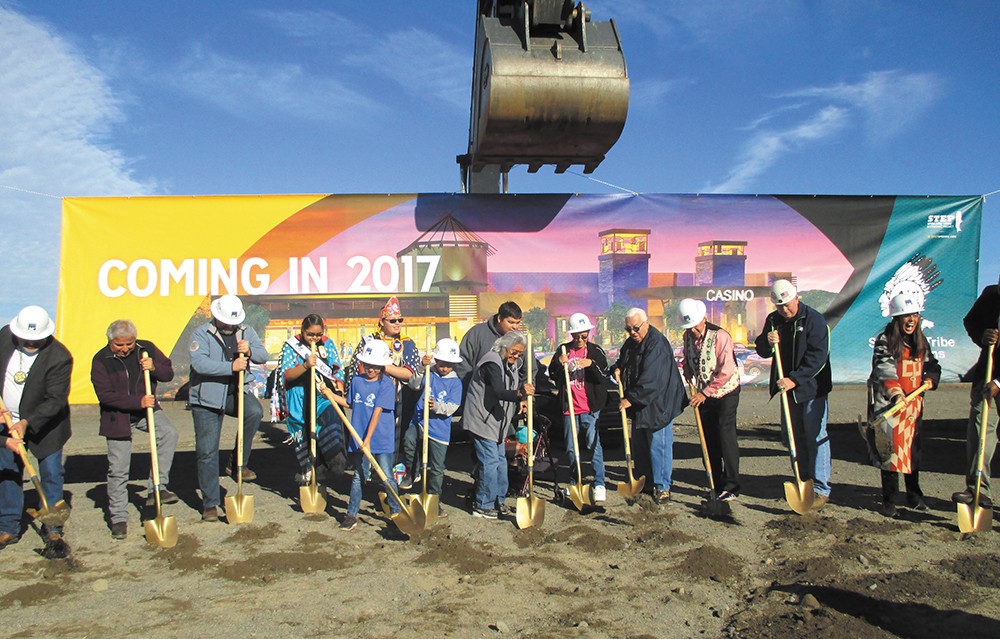 Courtesy of Swinerton
Members of the Spokane Tribe taking part in the ceremonial groundbreaking.

For 16 years, the Northern Quest Casino in Airway Heights has provided jobs and revenue for the Kalispel Tribe. Soon, the Kalispels' casino will be joined by a new casino from the Spokane Tribe.

Construction began on the casino in November of last year, part of a big mixed-use development called the "Spokane Tribe Economic Project," on 145 acres in the West Plains that the federal government had set aside in 2001 for the Spokane Tribe.

According to a Spokane Tribe press release, the casino, due to open in late 2017, will include 450 slot machines, 12 table games, a restaurant and a deli. In future phases, the project will add a tribal cultural center and a resort hotel as well.

Yet the development continues to be controversial. Spokane County, which forfeited receiving tax revenue from the project in order to freely oppose it, sued the U.S. Department of the Interior for approving the project. In particular, county commissioners have voiced fears that the casino's location under some flight paths of the nearby Fairchild Air Force Base could make the base more likely to be shuttered in the future.

Initially, the Air Force also raised some concerns about the project's location. But in subsequent years, it worked with the Spokane Tribe to address issues. According to a letter sent to Gov. Jay Inslee last year from Assistant Secretary of the Air Force Miranda Ballentine, "any issues that may have been of concern were addressed via the Tribe's proposed mitigations," and the Casino is "well outside of the existing noise zones and Potential Accident Zones."

For proponents of the project, like City Council President Ben Stuckart, the casino stands to change the West Plains for the better.

"I can't wait to see what the Spokane Tribe will build here," Stuckart said last year. "I know it will leave a lasting legacy, and I look forward to working with the Spokane Tribe to make this city the place it was meant to be." n