Eastern got a win! The Cougs are looking great! And the Seahawks? Well, they barely beat one of the NFL's worst teams. Here's your Monday Morning Placekicker, a breakdown of the weekend's local sports action: 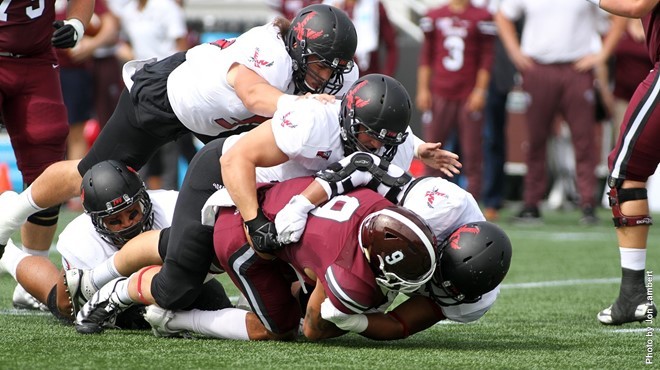 EWU Athletics
EWU's defense made life miserable for Fordham all day Saturday.
Eastern Washington fans can breathe a wee bit easier after the Eagles got their first win Saturday on a trip to New York City for a game against Fordham. That win was an emphatic one, a 56-21 rout that featured 10 sacks by the defense and the first appearance of the EWU offense that fans have come to expect. Quarterback Gage Gubrud threw for 399 yards and three touchdowns, and ran for two more scores, while helping new head coach Aaron Best notch his first win. With the win, the Eagles moved up to No. 11 in the country.

The trip to the Bronx was a rarity for the Eagles; it was just the sixth time EWU played in the Eastern time zone, and only their eighth time to play east of the Mississippi River. Fun trivia, for sure, but most important is the fact the Eagles can kick off their Big Sky season this week with a game at Montana against the Grizzlies. 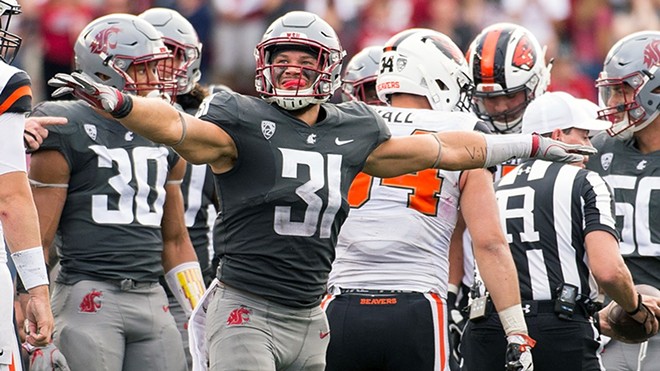 WSU Athletics
WSU pummeled the Beavers in Pullman on Saturday in the Cougars' Pac-12 opener.
The Cougs had a field day against Pac-12 weakling Oregon State, and their 52-23 victory vaulted WSU to No. 18 in the new AP Top 25 football poll, moving up from No. 21.

After quarterback Luke Falk looked battered and bruised and was ultimately removed from last week's Boise State game, he was back in fine form, throwing six touchdown passes against the Beavers in a game that wasn't as close as the final score. Up next for the Cougs is a home game against Nevada, meaning WSU should be 4-0 heading into their showdown against USC in a couple of weeks.


VANDALS FALL, WHITWORTH CRUISES
Idaho had an upset going, leading 28-19 going into the fourth quarter on the road against Western Michigan, but they couldn't hold the lead and ended up falling 37-28. It was a disappointing end, considering Western Michigan hung tough with USC earlier this year, and the Vandals outgained the Broncos both on the ground and through the air. Now 1-2, Idaho opens its final Sun Belt Conference slate Saturday against South Alabama in Mobile.

The Pirates, on the other hand, pummeled La Verne 53-0 Saturday at the Pine Bowl, with quarterback Ian Kolste only needing two quarters to throw for 291 yards and four touchdowns. In the process, he set school records for career passing yards and touchdowns. Whitworth now has a bye week before traveling to Northwest Conference power Linfield.


SLEEPLESS IN SEATTLE
A home game against San Francisco seemed like just the cure for whatever ailed the Seahawks in their season-opening loss on the road to Green Bay, but instead Seattle managed to deliver one ugly game. Still, as the cliché goes, a win is a win.

The offensive line was atrocious (surprise! not), quarterback Russell Wilson had to run for his life more than once, and the defense saved the day in a game that ended up in a 12-9 win. I can typically find some beauty in an ugly football game, but yeesh.

Up next for the Seahawks is a road game against the potentially tricky Titans, a team with a good defense and some weapons on offense for quarterback Marcus Mariota to work with. The game airs next Sunday at 10 am on Fox.

YMCA of the Inland Northwest welcomes refugees, immigrants with events this week