Eastern Washington and Idaho rallied on the road for stirring victories in their conference openers, while Washington State breezed past another outmatched nonconference opponent at Martin Stadium. The Seahawks? They've got issues, but not on the side of the ball you'd expect. Your Monday Morning Placekicker, a recap of the weekend's local sports action:


GUBRUD, EAGLES SOAR IN SECOND HALF 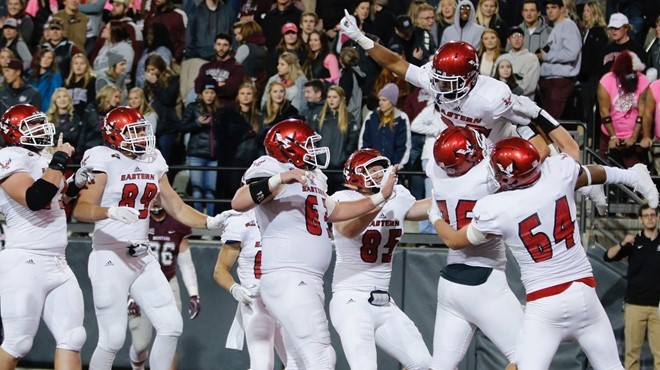 EWU Athletics
It was a total team effort as Eastern rallied from a 24-6 halftime deficit to stun Montana 48-41 in Missoula.
At the end of the first half, it didn't look promising for Eastern in Saturday's Big Sky Conference opener in Missoula, as the turnover- and penalty-plagued Eagles had managed just two Roldan Alcobendas field goals and trailed Montana 24-6. But the second half was a different story, as Eastern erupted for 21 points in the third quarter and 21 more in the fourth, stunning the Griz in a 48-41 victory.

The Eagles put up video-game-worthy numbers on offense: QB Gage Gubrud completed 44 of 65 passes for a career- and school-record-high high 549 yards, throwing for four TDs and running for another. His top targets were WRs Nic Sblendorio (18 catches for 189 yards and a TD) and Nsimba Webster (13 for 143 yards). Sam McPherson caught three passes for 70 yards, taking two of them in for scores. WR/KR Dre'Sonte Dorton, who also caught a TD from Gubrud, finished with 174 all-purpose yards, 134 on five kickoff returns.

Eastern's defense, led by safety Mitch Fettig (14 tackles) and linebacker Ketner Kupp (10 tackles) played much better in the second half than it had in the first as the Eagles won in Missoula for only the third time in the past 20 years. Up next for 2-2 Eastern? Sacramento State in Cheney, next Saturday at 1:35 pm. 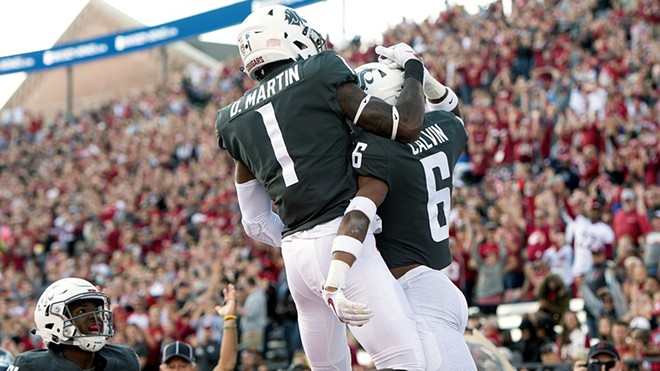 WSU Athletics
Freshman wide receivers Davontavean Martin and Jamire Calvin had plenty to celebrate Saturday at Martin Stadium.
Washington State rolled to a 35-0 halftime lead in a 45-7 rout of Nevada on Saturday, keeping the Cougars undefeated heading into Friday night's showdown with No. 5 USC in Pullman. The Wolf Pack had no answers for senior QB Luke Falk, who completed 36 of 47 passes for 478 yards and five TDs — two to WR Tavares Martin Jr., who caught four balls for 114 yards — and no interceptions. Falk has now thrown 103 touchdown passes in his illustrious Cougar career.

The Cougs' defense did its job as well, holding Nevada to just 151 yards in total offense as defensive linemen Hercules Mata'afa, Nnaidi Oguayo and Garrett McBroom combined for five sacks. WSU, now 4-0, rose to No. 16 in the AP Top 25 poll with the dominating victory.

U of I Athletics
Isaiah Saunders, who scored the game-winning TD in the second overtime, and the Vandals outlasted South Alabama.
With Idaho and South Alabama tied at 13 on Saturday in the Sun Belt Conference opener for both teams, lightning struck at Ladd-Peebles Stadium in Mobile, Alabama, midway through the fourth quarter, resulting in a two-hour delay. After the game resumed, with time running out and the Vandals trailing by seven points, senior QB Matt Linehan led a nine-play, 61-yard drive, capped by a 10-yard TD pass to Alfonso Onuwor with 13 seconds left that forced overtime.

The teams traded field goals in the first OT. Following a second half-hour lightning delay in the second overtime, Isaiah Saunders scored the game-winning TD on a 2-yard run as Idaho pulled out a grueling 29-23 victory in a game that took nearly seven hours to complete. The win, its first in a conference opener in five years, squared Idaho's record at 2-2; the Vandals are off next week but host Louisiana-Lafayette at the Kibbie Dome on Oct. 7.


SEAHAWKS COME UP SHORT AT TENNESSEE

Unlike in their first two games, the offense wasn't the issue for the Seattle Seahawks on Sunday in Nashville against the Tennessee Titans: QB Russell Wilson threw for a career-high 373 yards — 105 of them to WR Doug Baldwin, who had a career-high 10 catches — for four TDs, but the Seahawks' vaunted defense collapsed in the second half, wilting on an 88-degree day with 97-percent humidity in Nashville. Despite a fourth-quarter rally, the result was a dispiriting 33-27 loss that dropped Seattle to 1-2.

The Titans, trailing 14-9 at halftime, scored 21 third-quarter points as the Seahawks missed tackles and assignments and defenders, particularly Pro Bowl cornerback Richard Sherman, generally lost their cool. Tennessee gashed the Hawks for 195 rushing yards, 165 in the second half, as DeMarco Murray ran for 115 yards and a TD. The Hawks return to action next Sunday night at home against the Indianapolis Colts.

The Hawks' NFC West competition didn't look any better on defense, as the visiting Los Angeles Rams outlasted the San Francisco 49ers 41-39 in a Thursday night game. Cooper Kupp, a rookie from Eastern Washington, caught two passes for 17 yards for the division-leading Rams, who improved to 2-1. The cellar-dwelling 49ers dropped to 0-3. The 1-1 Arizona Cardinals host the Dallas Cowboys tonight.

CONCERT REVIEW: The Shins hit the Knitting Factory stage and transported everyone back to 2004